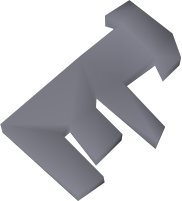 The Tooth half of a key is an item dropped by any NPC that drops gems. They are also a reward from various random events, and can be found in the chest in Taverley, the barrows chest or the evil tree rewards. It is also a reward from the Gnome Restaurant minigame, although much more infrequently than the loop half.Sjabloon:Citation needed This item can also be obtained from a random event gift box although this is rare.

The tooth half of a key is used with a loop half of a key to make a crystal key. This is used to unlock the Crystal chest, which contains a dragonstone, and other items.

Before the introduction of the Grand Exchange, both halves of the crystal key sold for the same price, at around 45,000-55,000 coins each.