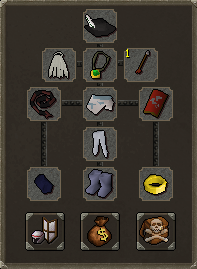 The Worn Equipment shows all the equipment that the player is wearing or wielding. The equipped inventory is divided into 11 slots for each area of the body that some piece of equipment can be worn on. Since the 11 slots can each be equipped with an item which then no longer appears in the backpack inventory, a player can effectively carry 39 items with them at once. The slots and what they can be equipped with are listed below.

Some type of helmet armour is usually worn on the head. However, when Runecrafting a player may wear a tiara on their head so that they do not need to bring a talisman. Also, various hats and other novelties, like Party Hats or Gnome Goggles can be worn here.

As the name suggests, capes are worn in the cape slot. While basic capes provide a small defence bonus, capes such as the God capes and the Fire cape provide considerable defence bonuses.

The neckwear slot is where some jewellery, like amulets and necklaces and symbols, are worn. While the jewellery itself offers no bonuses, when it is enchanted or blessed it can offer considerable bonuses. Currently, the best overall neckwear for members is the Amulet of Fury, and the Amulet of Power for non-members.

This is where a player equips weapons, items that will be used to deal damage in combat. If a player is using a two-handed weapon, such as a bow or a two-handed sword, they may not have any items equipped in the shield slot at the same time. In the case of thrown weapons, which are stackable, multiples of the same thrown weapon may be equipped in the weapon slot at once. A player may also equip a pickaxe or a woodcutting axe in the weapon slot so that they may hold more ore or logs, respectively.

For combat purposes, some type of armour is usually equipped in this slot. However, there are also many non-combat items that a player may equip here, ranging from aprons to rewards from random events.

Equipment to be held in the player's off-hand is held here, most commonly a shield piece of armour. A player may also carry one of the God books instead of a shield, or a defender to provide extra bonuses to attack. However, if a player is using a two-handed weapon, such as a long bow, short bow, karil's crossbow, composite bow,(this does not include crossbows)or a two-handed sword, they may not hold any items in the shield slot at the same time.

For combat purposes, some type of armour is usually equipped in this slot. However, there are also many non-combat items that a player may equip here, ranging from skirts to rewards from random events.

Gloves, gauntlets, bracelets, and vambraces are equipped in this slot. While plain leather gloves provide small defence bonuses, members can get metal gloves that provide considerable bonuses. Coloured gloves are popular among higher level players. Rangers often wear vambraces instead of gloves, which give them bonuses to Ranged attacks.

Boots and shoes are equipped in this slot. While plain leather boots provide small defence bonuses, members can get metal boots that provide considerable bonuses. In some quests special footwear is required for certain parts.

The ring slot is where rings are worn. Excluding the Fremennik rings, the Lunar ring, the Beacon ring, and the Explorer's ring, rings provide no attack or defence bonuses. Members can enchant crafted rings or obtain other special jewelry that provides helpful abilities.