A self-styled admiral who trades in information. 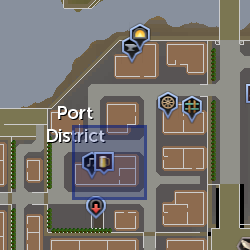 'Admiral' Wadud (Ports) is the faction leader of the Port district in Menaphos. A self-appointed admiral, he is met during The Jack of Spades quest. After the player is sent to meet with him by Grand Vizier Ehsan, the Jack of Spades steals his prized trinket from him. Ozan later reveals that Wadud is one of the corrupt officials in Menaphos, turning a blind eye to most crime and had stolen some ships and men when he was a member of The Skulls.

He states that when he was young, he was abandoned by his old crew. He later found the Skulls and they nurtured him, and this is where he claims that he grew his "sea legs". Going out into the sea with his loyal men, Wadud eventually encountered his own crew, and while the events are not mentioned, they plundered and killed them. The group later tried to find a town to settle down in, but were removed each time until they reached Menaphos, where he and his group were reluctantly hired by them to fend off raids by pirates and buccaneers.

In 'Phite Club, the player is sent by Ehsan to deal with striking sailors. Wadud had already been informed of Osman's coup but was unsure of what he asked from him. Wadud tells the player that his sailors wanted to keep sailing and disliked menial work such as unloading cargo and repairing ships. He told the player to speak with Batal to get workers to help with these tasks. Batal managed to get a group of workers ready for shipwork after being brought signets from Commander Akhomet, and Wadud agreed to join Osman's coup.

The rationale behind Wadud's promotion to the leader of the ports district isn't publicly known, however his intimate knowledge of the naval underbelly behind so much grief on the Menaphite shoreline has proved invaluable to a nation left high and dry.

He has always been one step ahead of the pirate crews that seek to dam the flow of riches that gush through the docks of Menaphos, equipping the cargo vessels with ingenious routes and repulsion tactics. The men around him recognise him as one of their own, someone who truly lives for the thrill of the ocean, but his existence is met with squirms from the nobility that see him as a necessary evil.

He finds it very easy to bond with those around him, so long as they carry a tale of the tumultuous tide he worships. Much to his chagrin, Wadud has reached a point his career where he is required to be a landlubber for communication's sake, and longs to be a sojourner on the surrounding seas once more. 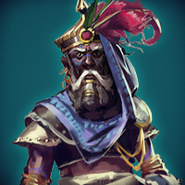 Concept art of Wadud.
Click an image to enlarge

Retrieved from "https://runescape.fandom.com/wiki/%27Admiral%27_Wadud_(Ports)?oldid=24565840"
Community content is available under CC-BY-SA unless otherwise noted.