Famous for his fights. 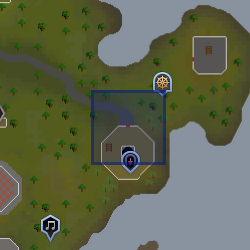 'Black-eye' is a builder hired to build the Tower of Life, but who went on strike as the crew were suspicious of their employers' motives.[1] He spends his time playing rock-paper-scissors with his fellow builder 'Gummy', having won 50 games each.[2]

During the quest Tower of Life, he can be approached about obtaining pieces of the builder's costume. He offers to hand over a spare hard hat of a builder who died if the adventurer can correctly answer three Construction related questions. The answers are three, torn curtains, and ten pieces of clay. When asked about the apparent bloodstains on the helmet, he claims it is paint.