'Phite Club is a quest that was released on 5 June 2017, along with the city of Menaphos.

Speak with Hassan in the Merchant district, and he will ask for your help. He asks for Ehsan for a short moment of privacy, and she sticks her fingers in her ears. Osman appears, asks you how you see the city, and that your reputation with its leaders have provided him the perfect opportunity to sneak in after his exile. Osman reveals the dark secrets of the city, and reveals his plans to not only overthrow the usurpers on the throne, but to restore social justice.

Osman reveals that he has a secret deal with Ehsan. Speak with her. She says that she will assist in the coup if she keeps her position and power, in addition to new influence within the city. Hassan reveals that Osman has already promised her these things. Finally, she asks you to speak with Wadud about some Ports workers that are on strike over unfair wages.

Speak with Wadud in the pub in the Port district. He informs you that he knows about the coup, but not what Osman wants of him. Wadud agrees, wanting social change in the city, and believing Osman to be the lesser of two evils. However, he wants you to find some people willing to load cargo onto his ships from this point on, as his sailors don't like the menial work. He asks you to speak to the workers.

Speak to Batal next to the bonfire in the Worker district. He tells you of the jobs crisis in his district, and how his people are starving and fear for loss of what few jobs they do have. You tell him of Osman's revolution, and he is skeptical, but agrees to take part in the coup, on the condition that the workers may retire once they reach a certain age, like the other castes do. In order to do this they must be granted imperial signets from the Pharaoh, but lately he has stopped this tradition. He asks you to speak with those in the Imperial district to resume these ancient proceedings.

Speak to Akhomet in Imperial district. You inform her of the coup and she is alarmed that you would speak so brazenly and openly about it. She agrees, however, that he is unfit to rule, admitting that she has seen him fall into psychosis, and lose touch with his people and the city. Her only condition is that the coup be bloodless, insisting that the Pharaoh get the mental help that he needs. You admit that Osman also wishes for it to be bloodless and she agrees so long as you can get the other city leaders on board with the coup. She comes up with yet another "only condition", this one being you bringing the Jack of Spades to justice.

Speak to Ozan in the lobby of the Shifting Tombs. You inform him of what is going on and ask if you can take him prisoner. He declines and gives you his cowl and insists you cover it in blood to make it look like he is dead.

Use Ozan's mask with the bucket of blood next to the fish stall in the Merchant district to dirty it with blood. Give Ozan's blood-covered mask to Akhomet in Imperial district. She is shocked that you killed him, but impressed that you claimed to have burned his body. She gives you an imperial signet. Give the signets to Batal in Worker district. He thanks you and promises to pass them out to the most deserving. He gives you an employment certification, promising to send his best and brightest workers to Wadud. Give the certificate to Wadud in Port district. He says that he will ensure the worker strikes are brought to an end, and directs you to Ehsan. Speak to Ehsan back at Merchant district who informs you that she has already received word that the strikes have stopped. She gives her full support.

Gear up for the ensuing battle. It is recommended to use ranged or magic, and bring shark or better food, along with prayer potions and a Beast of Burden familiar. Speak to Hassan to teleport to the Throne Room. When you arrive, the cities faction leaders will watch you fight from the far corners of the room. First, you must battle four level 105 menaphite palace guards. Two of them use melee and have 20,000 life points; the other two use magic and have 25,000 life points.

Once they are dead you will reach a checkpoint. The Pharaoh will approach you with 150,000 life points. He can be relatively difficult if you're not prepared. The Pharaoh's battle will apply corruption identical to the Sophanem Slayer Dungeon, so bring feathers of Ma'at to cleanse it and reduce damage taken, and he spreads green fire that can deal 1,000 damage per tick, so make sure to move around a lot. After losing approximately half of his life points, there will be a small cutscene where the Pharaoh removes his mask, he will summon fire around him for a short time, making melee difficult. His magic attacks will also hit harder after his mask is removed.

He has three different special attacks, which he uses after every 3 auto-attacks.

If you die here, it is not considered a safe death; your gravestone will appear in the Imperial district, west of the Shifting Tombs entrance. However you do not need to fight the Menaphos Palace Guards again if you previously killed them.

When you beat him, the Pharaoh tells you that once upon a time, he prayed to the Gods to help him rule, but the only one to answer his prayers was Amascut, who corrupted him. His corruption by Amascut has been lifted, and desires that you pass judgement. He realizes that what he did was horrible and begs mercy in atoning for his sins. At this point, you can decide the Pharaoh's fate. You can Exile him to the Arc, Execute, Imprison, or Enslave him. However, regardless of your decision, Osman will appear and declare that it is his right to choose. He then kills the Pharaoh by stabbing him in the neck with his dagger.

A cutscene begins with Amascut, Jabari and two Thralls at the Soul Altar, with the Kharid-ib floating above. Tumeken speaks through the Thralls and Jabari, telling Amascut to forget her anger, and give up on this task, that he is afraid. Amascut insists that destruction is necessary, and screams that she is not his daughter. She finally yells "I am Amascut!" and power shoots out of the Kharid-ib into the four people present, and the screen fades to black.

Make sure to have a free inventory spot, otherwise the Relic of Tumeken can be retrieved from one of the Menaphite royal guards next to the throne. 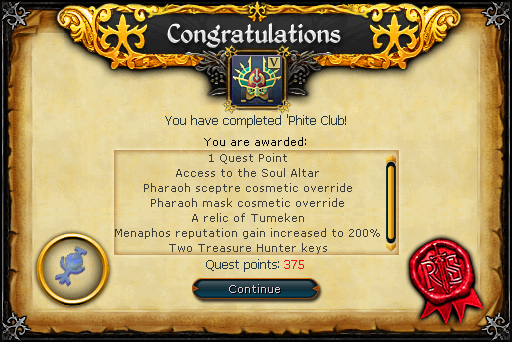 Retrieved from "https://runescape.fandom.com/wiki/%27Phite_Club?oldid=20313602"
Community content is available under CC-BY-SA unless otherwise noted.