The 10th anniversary chest is a chest that first appeared on 4 January, 2011 in Varrock to celebrate RuneScape's 10th Anniversary.

The 10th anniversary chest could be only used by J-mods who would deposit items that would be dropped to the attending event players, rewarding them with items such as 10th anniversary cake and 10th anniversary candles. If a chest was spawned on a square on which an avatar was standing on, they would be able to sit down or stand up inside the chest - they would not be forced off. If the user clicked outside the chest, they would walk out, but would not be able to get back in. The first chest appeared shortly before 19:00 Forum Time for five minutes. At 19:10 balloons appeared, as they do at Falador's Party Room, where players scrambled to get the rewards they held.

Other events occurred at the Jolly Boar Inn, Rimmington, Clan Wars, Draynor Manor, and at the Falador Party Room.

The event on 9 January which occurred at the party room was not initially a planned event. Instead it started as a "Forum Awareness" campaign, where a long line of players would walk around RuneScape, shouting "Join the Forums!" and other similar sentences. The campaign ended at the Falador Party Room on World 81. Due to many players asking for a 10th Anniversary drop party, Mod Jon H initiated one, dropping over 10,000,000 coins, along with runite armour, and 10th anniversary cakes and candles. 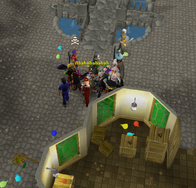 Balloon drop
Click an image to enlarge
Retrieved from "https://runescape.fandom.com/wiki/10th_anniversary_chest?oldid=22894229"
Community content is available under CC-BY-SA unless otherwise noted.