The 2008 Easter event started on 18 March 2008 and ended on 31 March 2008. Players were rewarded a chocatrice cape, among other things, for completing it.

Players had to make their way south of Falador, towards the Rimmington Mine to the Easter Bunny's rabbit hole. To start the event, players had to investigate the hole.

The Easter Bunny's bouncer asked the player to first run around Asgarnia to find 3 chocolate eggs. There were 9 altogether, but you only needed 3 to enter the hole.

There were five clues given by the bouncer to suggest locations for the eggs:

The eggs could have been found in the following places:

(The three locations in italics are closest to the hole). 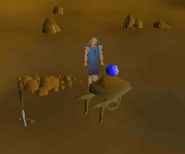 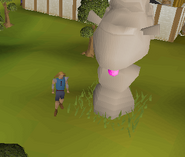 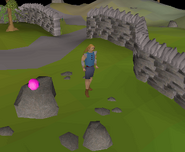 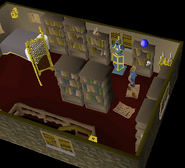 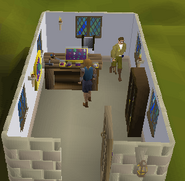 After the players had found the 3 eggs, they had to return them to the Easter Bunny's hole. He explained that the critters have eaten the chocolate while he was gone and that he needed to make more eggs from the eggs the players have brought him. He said that he was going to make a 'Choc-atrice'.

Players grabbed a cockatrice egg from the pile nearby and dipped it into the large bowl of 'Molten Chocolate' (resembling a chocolate pool in the middle of the room), in turn receiving a chocatrice egg. They then had to incubate their egg in the eastern area of the warren. In order to accomplish this, players had to fill the incubator with 12 buckets of water and 12 buckets of coal, adjusting the temperature so that the chocatrice would hatch.

Once the egg has hatched, its occupant promptly ran away into the Main Warren.

Getting the chocolate chunks

The Easter bunny said that he wanted the players to go into the Main Warren. However, since the entrance to the warren was too small for the player to enter, he transformed you into a bunny so that you could fit through the hole. Once the player was transformed into a bunny, they entered through the hole. Immediately upon entry, they had a conversation with their Chocatrice. It gets angry with you, and nearly turns you into chocolate, but in the end obeys you. You had to move through the tunnels, all the while targeting the Chocatrice's special ability on mice, rats, spiders, snails and cockroaches, turning them into chocolate, which were collected for the Easter Bunny.

Once they had 12 chocolate chunks, players worked their way back through the tunnels to the entrance and exit. Talking to the Easter Bunny changed the player back to into a human, they added their chunks to the chocolate mixer near the Easter bunny to receive a chocatrice cape.

After completing the event, if players hadn't unlocked the Bunny-hop emote yet, they had to talk to the Easter Bunny after getting the cape. He would say that if you collect 10 more chocolate chunks, he'll give you an extra special reward. Once you collect the chunks, turn them into chocolate, and you'll have unlocked the bunny-hop.

If players added more chunks to the chocolate mixer, they would receive a message that said: "The Easter Bunny beams down at you as you helpfully bolster his chocolate stockpile."

In order to get all rewards, players needed a total of 30 chunks (or 40 if they didn't have the bunny-hop emote yet). On 31 March 2008, the chocolate eggs rewarded were turned into dust.

When you Operate the chocatrice cape, you will do the Giant Easter Egg emote.

The following is some remarks your player said as a rabbit to fuel your chocatrice's anger so it would turn the creatures to chocolate. They all start with 'Hey, see that [rat/spider/cockroach/snail/mouse] over there...'.

If you target your own chocatrice, you will receive a message: 'The chocatrice refuses to target itself. How smart!'

If you try to target another chocatrice you will receive a message: 'The chocatrice is not interesting in targeting that.'

Retrieved from "https://runescape.fandom.com/wiki/2008_Easter_event?oldid=20808141"
Community content is available under CC-BY-SA unless otherwise noted.