The 2009 April Fools event was released on 1 April 2009. If a player tried to pick a cabbage from the Falador cabbage patch, the cabbage would come to life, say a random phrase (such as "All hail Brassica Prime!") and hop around, or the player would pick a cabbage seed. The players could tap, kick, or catch cabbages. Once they were caught, they could be used as a weapon, thrown to other players, or be eaten. Players needed to have Accept Aid on and both hands free to toss a cabbage. However, all cabbages, with the exception of Draynor Manor cabbages, could be wielded. The "wield" option for cabbages was apparently removed when the Easter event began.

There was talk of a hidden message. Mid-afternoon, a Jagex Mod confirmed it was this: Those who were bored enough to kick one of the bouncing cabbages from the cabbage patch north-west of Draynor Village all the way to Oo'glog were thanked and rewarded with a cabbage by the one and only Brassica Prime!

Another joke appeared on the official forums when Mod Emilee said the seagull was added to the Hunter skill and that you could catch it with a butterfly net.

A player throwing a cabbage.

Cabbages hopping all around the Draynor Cabbage field.

The real hidden message was a thank you from Brassica Prime (confirmed by Mod Ash). 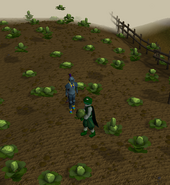 A player holding a cabbage in the middle of a cabbage patch full of jumping cabbages.
Click an image to enlarge

Retrieved from "https://runescape.fandom.com/wiki/2009_April_Fools?oldid=18747739"
Community content is available under CC-BY-SA unless otherwise noted.