The 2009 Easter event, Splitting Heirs, Started on the 8 April 2009 and ended on 21 April 2009, one day earlier than the usual 2 week length. It was located south of Falador. This event was available to members and Free players, as all holiday events have been.

"The Easter Bunny seems to have been around forever. Or has he? What makes him seem immortal? This Easter, calamity has once again befallen his factory, and he needs your help to solve the problem. As well as giving you the chance to fix some impressive machinery, and deal with some colourful (but less than helpful) characters, Splitting Heirs will also give our free players a taste of what it’s like to catch implings!

This event revisits the past, so if you’ve played previous Easter events you’ll recognise the incubator from 2008 and the Easter Bird from 2006. Find out what makes the Easter Bunny tick and at the same time earn yourself a new fun weapon. So what are you waiting for? Go seek out the Easter Bunny!"

A player turning into a rabbit

Start by talking to the Easter Bunny who can be found south of Falador. He will tell you that while he was on holiday, his son made a mess of the egg factory. Ask "Can I help?" he will then offer to store your items in the bank.

Enter the bunny hole, it's hard to miss (you cannot enter the bunny hole with items) . Before you enter, your character begins turning into a bunny. Walk in a North-west direction. You will come to another Rabbit Hole. On the mini-map it will be the northernmost part of the cave you are in. It is lit, as if there would be a light behind it. Climb through this.

You now come to the Chocolate Egg Factory. Walk north into the second part of the cave. You will be in a cave where there are two impling jar spawns and an impling net spawn. Pick up 5 Impling Jars and a net for later use. Walk further west into a messy cave where Easter Bunny Jr is sitting near a desk. Talk to him, and he will ask you to complete his father's to-do list. To see it, just go east to the room with the impling jar and impling net spawns. The noticeboard is at the North-west corner of the room.

To the north of his cave you will see an Incubator Blueprint, with instructions on what to do. Pick it up and read it.

Your first task is to wake up the Easter Bird at the centre of the main cave. Talk to it and do so by cheering, clapping or by blowing a raspberry.

By talking to the bird you'll learn that it needs feeding and the bird tells you what type of food it requires. To the east you'll find four sacks. Search each one until you find the type of food the bird asked for. Walk back to the Easter Bird and feed it by using the requested food on the Seed bowl.

To the north you'll notice a water tank (well visible on the mini-map). Get yourself a Bucket of Water (Bucket will be provided when you get the water). Walk back to the bird and use the bucket of water on the water bowl. Now, talk to it. It should now be able to lay eggs. Talk to Easter Bunny Jr, who appears near the bird. Tell him that it produces cheap chocolate. He will soften a little and tell you to go catch imps.

These buckets of water are the only thing you can take from the warren.

Your next task is to catch some Easter implings. You will need the 5 impling jars and the butterfly net that you grabbed earlier. Now, walk to the cave section to the east of the main workshop (not the tunnels where you turn into a rabbit). You will find 5 implings scattered in the corners of the tunnels. Catch them all (you'll automatically put them into your jars). And then use them with the Egg-painting machine at the south of the main cave to get them back to work. Next, talk to Easter Bunny Jr, who will appear by the Egg-painting machine.

Make sure that when talking to Easter Bunny Jr, select the correct sentence that will convince him. Choose the option that makes everything seem amazing for the bunny appears to you for.

Your next task is to fix the incubator.

Talk to the impling worker who is next to the incubator. You must find the parts of the incubator which are in different boxes and crates. These are scattered in the room. Look for boxes (remember, this means ALL boxes: chocolate-egg-filled and nut boxes alike) with the search option to find out six components: cog, pistons, chimney, sooty pipe, wet pipe and clean pipe. Return to the machine.
You must replace the parts in the correct order (see incubator blueprint, obtained from the Easter Bunny's office).
Use the clean pipe for the controls;
cog, pistons, chimney for the main part;
sooty pipe for the coal container;
wet pipe for the water storage.

Easter Bunny Jr will appear once you have finished your repair works. Again, you should introduce the function of the incubator to him by choosing the right option.

Finally you will be asked to remove the vermin sleeping on the machinery. Walk to the south west of the incubator. Click "Look-at Nut machine," then click talk to Big Ben. Choose the option "20%" and you will finally both agree on 25%. Say you will train the squirrels now.

Simply click the button on all the Graardor figurines, bolts, nails, broken nuts(dark; two pieces), chocolate egg (dark brown; one piece). You will finish as soon as you get 10 correct in a row. Speak to Easter bunny's son next to the nut machine. He will tell you to meet him in the office since he has decided something.

Do not discard the small grey nuts or the big grey nut as these are the good nuts which you want to let through. Discarding one of these will reset the counter to 0.

A player performing the emote

For completing the event players were rewarded with an Easter carrot. The Easter carrot is a two-handed fun weapon that can be used to whack other players, much like the Rubber chicken from the 2005 Easter event.

Players will also unlock the Around the World in Eggty Days emote, and the Bunny-hop emote if it has not already been unlocked, although the Easter Bunny will not tell the player about either of them.

A player becoming a rabbit 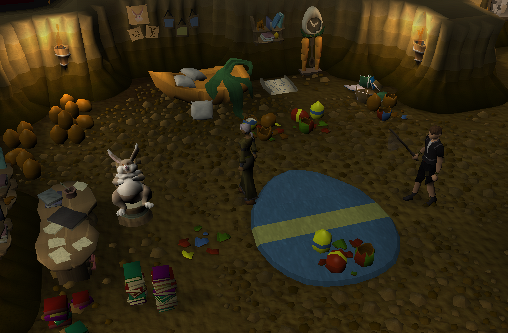 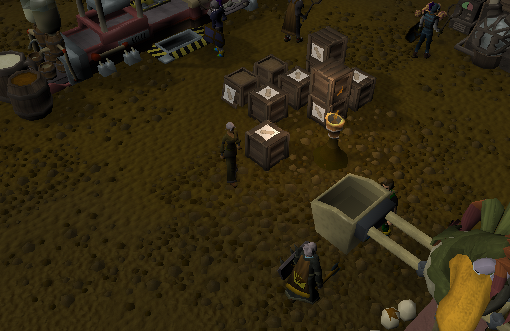 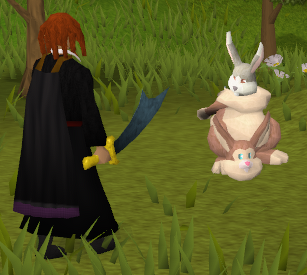