The 2009 Hallowe'en event, also called Web of Shadows, was a holiday event that was released on 26 October 2009 and removed on 9 November 2009. The event took place in the Grim Reaper's house and the Spider Realm. To access the event, the player could enter a black portal (similar to a Player-owned house portal) located South of Falador and east of Rimmington (where the Elemental Wizards are located), at the same location that the portal was two years prior during the 2007 Halloween event. See the holiday event icon

on the world map and minimap. The Grim Reapers house somewhat resembles the current Draynor Manor.

Players had talk to the Grim Reaper in his house in the black portal south-west of Falador. He would tell them he had a spider in his bath, and wanted it removed. If players refused, he would kill them and they would appear outside the portal with all of their items. Players headed to the northern room with the staircase and ascended the stairs. They found the spider in the bathtub where the yellow dot was located on the minimap and talked to her. She would tell you, in one or two word answers, that the Spider Queen had sent her and that she would only move if the Spider Queen told her to. Players reported back to the Grim Reaper, and he would create a goo-like portal for them to teleport to the Spider Realm. After entering it, players would find themselves on the first floor of a four floor area.

On the first floor, players would find themselves on a small unstable web. The player had to cross web strands to reach the ladder at centre of the web, however, only certain web strands could support the player—If the player crossed a wrong strand, they would fall down and be taken back to the beginning of the web. The player had to use trial-and-error to find the correct strands and make their way to the centre of the web. Note that there is only one correct path that the player may take, and it was different for every player. (This puzzle was similar to the "Where am I?" puzzle of Lunar Diplomacy, or the "Pit and the Grid" puzzle of Underground Pass, albeit in a much more simple form). There were a few reports of players successfully completing the First Floor by taking the longest route possible (e.g. looping left, and coming in on the Northwest part of the ladder instead). Many players thought that it depended on their agility level as to whether or not they would be able to cross a web strand.

The second floor of the dungeon was an Agility course style level. Players were required to do various stunts such as swing across monkey bars, walk tightropes, hop from stone to stone and do Matrix-esque wall runs. The obstacles could not be failed. They did not give any Agility experience for Free-to-play or Pay-to-play, either. The player had to make their way to the ladder on the northern-most web at the centre.

When the player reached the third level, they could find the Spider Herald. After the player mentions that they are helping the Grim Reaper, the Spider Herald would allow the player to climb the ladder to the level leading to the Queen Spider. You had to tell him that you needed to visit the queen or else there is no way there. There were many other spiders there such as the Royal Fly-Catcher, and Master Web-Spinner, Grand Chamberlain of the Web, Marshal of the Teeming Horde, Knight of the Eight-Fold Seal, Keeper of the Royal Eggs and various spider Courtiers. A way to get through without getting lost was to always go north.

The Spider Queen would tell the player that the Grim Reaper offended her and the entire spider kingdom by sweeping all webs from his house, on Hallowe'en, upsetting the order set by Guthix. The Queen would refuse to let the giant spider leave from the Grim Reaper's bathroom until his house was again filled with spider webs.

The Queen would instruct the player to talk to the Spider Herald again, who will give the player a companion named Eek. The player was then instructed to return to the Grim Reaper's house and to fill the house with webs with the help of Eek. The ladder going down from the third to second level in the spider realm has the option to 'Return to the Grim Reaper's house,' meaning that players did not have to backtrack through the dungeon.

After a short conversation, the Grim Reaper would instruct the player and Eek to place webs all around the Grim Reaper's house. Players would need to hold Eek on their hand by simply clicking on Eek in their inventory, and then left-click any furniture in the house that has the Web option. A total of 64 items would need to be webbed, (34 items on bottom floor, and 30 items on the top floor) in order for the Queen Spider to be satisfied. Eek would also inform players upon entering any room exactly how many items in that room need to be "webbed". The player could also Talk-to Eek at any time to determine how many items that need to be webbed are remaining in the current room.

Players would travel from room-to-room, looking for any object that Eek can web, and then move on to the next room when Eek informed them that the room has enough webs in it. Items such as candlesticks, chairs, tables, beds, footlockers, Death Clocks, wardrobes, cabinets, bookcases and fireplaces all needed to be webbed.

There was a room with Muncher, the Grim Reaper's dog, where the player would not be allowed to spin any webs until Muncher was satisfied - attempting to do so would result in Eek being scared by Muncher and unable to spin the web. You could right-click Muncher (or simply click Interact to open a dialogue box); and then Entertain him and then let him sniff Eek, so that Muncher could see that Eek is harmless. However, if the Raspberry option was selected, then muncher would kill the player in only one hit, no matter how high their combat level was. After Eek states that Muncher likes her, the items in Muncher's room could be webbed by Eek.

Once sixty-four webs have been spun in the house, the player would need to talk to the Grim Reaper to let him know the task is complete, and finally go to the Queen Spider (Select Go to spider court to bypass the maze) to remove the giant spider from the Reaper's bathroom and to claim their reward. Players could converse with the Herald, Death, and the "bathtub spider" for more dialogue after finishing the quest. The Herald will vow never to forget your deeds, Death will reveal plans to tidy up the place after Hallowe'en, and the bathtub spider will continue to be mostly mono-syllabic. 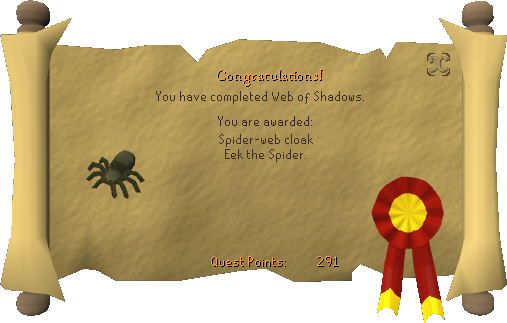 The rewards for completing Web of Shadows were:

Retrieved from "https://runescape.fandom.com/wiki/2009_Hallowe%27en_event?oldid=11648861"
Community content is available under CC-BY-SA unless otherwise noted.