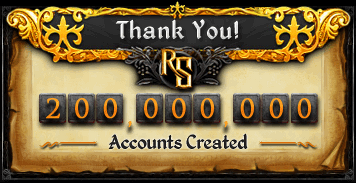 200m celebration
The music track that played when 200m accounts was reached.

The 200 million accounts celebration started after 200 million accounts had been created on 19 July 2012 at 15:09 UTC. The event was available for both free players and members. In this event, a Party Demon was released in Barbarian Village, Varrock Sewers and the Bandit Camp. This monster had 200,000,000 life points and could only be killed using the boogie bow, given out for free by Hey Presto. Upon slaying the beast (which may be attacked by multiple players), a pair of 200m glasses could be obtained from Hey Presto.

All players received notification of the event upon logging in. There was a special soundtrack created and played for the event, which can be played from this page.

Some players have expressed their discontent with this milestone and Jagex's use of the word players in the 200 million timeline on the RuneScape website, as a significant number of those accounts were bots and therefore not players, and many players have multiple accounts thus further reducing the number of actual players.

The 200M Accounts infographic released on the 200M accounts site.

The ingame message upon logging in.
Click an image to enlarge

Retrieved from "https://runescape.fandom.com/wiki/200_million_accounts_celebration?oldid=18747744"
Community content is available under CC-BY-SA unless otherwise noted.