O Little Town of Daemonheim was a holiday event for Christmas in 2010. The event is based in Daemonheim and its "dungeons", where the player has to collect items for Thorvar Crittersmash while navigating through puzzles. At the end the player is awarded a Salty claws hat, a Heimland games souvenir, and the Seal of Approval emote.

You can start the event by going into one of the teleporting cabinets scattered around the free to play area. This includes Draynor Market, Varrock Centre, Lumbridge Castle, and Falador. You can also start this event by talking to Thorvar Crittersmash directly in Daemonheim.

He will hand you Thorvar's bag and Thorvar's bucket, but he refuses to tell you what they might be used for. You will then be teleported to a Dungeoneering cave, where you can begin the event! Make sure to store any summoning familiar pouches that you may have and to dismiss any familiar that is following you. Although this is a dungeoneering activity, you are permitted to carry items in your inventory, and are not required to bank before entering.

The first room has three icicles blocking the door, several large icicles protruding from the floor, and a switch on a pedestal in the centre. There are snowman accessories as you walk into the room on your left, that you must pick up before leaving the room. First, you must tap the switch. After you tap the switch, all the large icicles will light up at the same time. After this, they will light up in an order. You must remember which icicles light up in which order, then tap the icicles in that specific order. When tapped in the correct order, one of the icicles blocking the door will vanish. Repeat this process a further two times to remove the other two icicles from the door, and you will be able to go into the second room.

If you forget the order, tap the switch in the centre to create a new order.

In the second room, there is a Snow angel statue. When the angel turns around, the player must be behind one of the snow drifts, or they will be teleported back to the start of the room.

In the upper left part of the screen, there will be a little light. When the light turns green (which is while the snow angel is turned around), players are free to move about. However, if the light turns red while they are not behind a snow bank, they will be teleported. At the end, touch the Snow Angel to move on. There are no Fremennik items to collect from this room.

On lower graphics settings, the snow mounds may not be very visible.

There is no set cycle of turning, the angel turns when another player touches it, so only move if no other player is about to touch the statue. Advice would be to start moving just before the snow angel turns its back.

Note: Bring an explorer's ring or an energy potion if possible. It makes it so you crawl quickly which makes the activity easier to accomplish.

Tip: If your computer can be either resizeable or fullscreen, switch to one of these so you can see the snow angel much better. When you see it start to turn its back towards you, click to start moving towards the next snow drift so no time is wasted.

When you enter the room, grab the trinket of sealification. Then, right click the bag and choose "Use trinket" to turn into a seal. Click on the sides of the ice to start sliding. To turn click the arrows in the bottom middle of the screen. This room takes a little bit of practice to perfect, seeing as the turning controls have a slow reaction time. The objective is to go onto one of the green portals at the end of the room, while avoiding the various blue portals scattered throughout the ice.

The fourth room has five small rooms and portals. Some portals teleport you randomly within the room, and one in each set teleports you forward to the next set. There are 2 items you will need to pick up here; a snowmaker and some ice skates, prior to moving on to the next room.

It is impossible to know which portal to go in where without trying them, as the solution is different for each player. However, it is important to note that the doors are not random; therefore a trial-and-error method, similar to that used for the floor puzzles in Underground Pass and Lunar Diplomacy will, eventually, work. Simply try each portal, until one of the 4 moves you ahead to the next set of 4. Record which one for future use, but be prepared to revise that assessment if it turns out to be a "random teleporter" instead. One of the 4 will consistently move you ahead one stage, however, so you should be able to progressively solve the room and quickly navigate back to the last place you failed.

The fifth room has a large sheet of ice, along with some small holes in the ice. When the player enters the room, they will see Salty Claws, which is actually a heim crab wearing a Santa hat. To get through this room, the player must click on Salty Claws when he pops up from the ice. The player will slide along the ice, attempting to grab him. Do not attempt to catch any of the other crabs as this will allow Salty Claws to rest and it will take more tries to catch him. It is recommended that the player rotate the camera so as to place the side of the ice they are adjacent to perpendicular (west / east pointing up) to their monitor instead of parallel (north / south pointing up).

After four to six attempts (more if one of the other crabs was caught), the player will catch him and will be teleported outside, next to Thorvar.

You do not actually have to "use" the bucket to catch Salty Claws. Simply click on him.

Music tracks unlocked during this or future Christmas holiday events:

The switch in the first room.

One of the seals a player transforms into.

Salty Claws appearing through the crack.

The Christmas tree located in the Land of Snow. 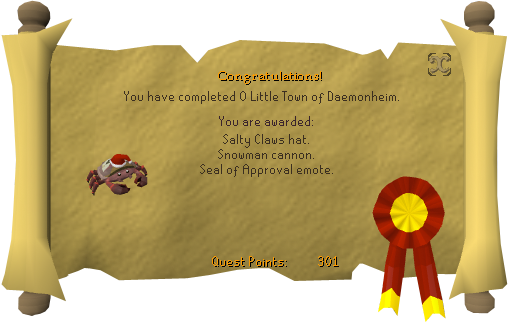 Retrieved from "https://runescape.fandom.com/wiki/2010_Christmas_event?oldid=18382597"
Community content is available under CC-BY-SA unless otherwise noted.