The 2010 Hallowe'en event, also called Partying is Such Sweet Sorrow, was released on 18 October 2010 and removed on 9 November 2010. It featured a bone brooch and the Puppet Master emote for the reward. The event can be started by talking to Pumpkin Pete, who is located north-west of Port Sarim, or by entering the portal (it will automatically let you talk with Pumpkin Pete).

If you completed the 2009 Hallowe'en event, there was additional dialogue throughout this event if you took Eek.

If you completed the 2006 Hallowe'en event, there was additional dialogue at points during this event if you wore the Jack lantern mask.

Talk to Pumpkin Pete near the portal to start the quest, then enter the portal. When you talk to him inside, he will tell you to talk to people around the house to help prepare for the party. You can do the various parts in any order.

Making the moonshine (must be done in this order):

Note: Making a mistake in mixing the drink causes the player to start over.

(Aside: His responses before you talk are:

If you have Eek the Spider in your inventory, your conversations with Minstrel Web will be a little more humorous and interesting, as Eek chimes into the conversation.

The spiders are hidden around the house. Two are on the ground floor. Six are upstairs.

Every spider can be thought of as having two states: "binary" spiders in a sense. They can either be "off" the correct tile, or "on" it. Choosing to move a spider may change the state of either one or two spiders, not necessarily the chosen one, as follows.

The quickest way is to talk to Allan (the raven next to Minstrel Web) and ask him to reset, if you have moved any of the spiders, then click on the following colours:

Note: This is only one of many ways to solve the puzzle. Shown here is an example of the fastest (5-move) solution.

Message that appeared when logging in during this event.

The decoration behind the performers.
Click an image to enlarge 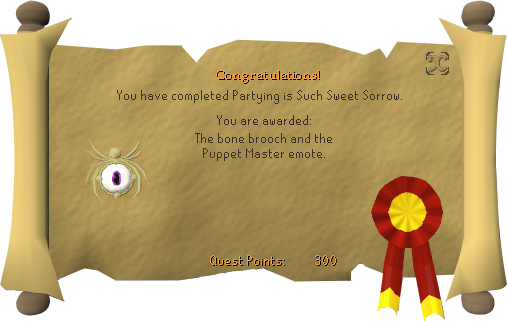 Outside of the Grim Reaper's house.
Click an image to enlarge

Retrieved from "https://runescape.fandom.com/wiki/2010_Hallowe%27en_event?oldid=19715712"
Community content is available under CC-BY-SA unless otherwise noted.