"A Towering Feast", also known as the 2011 Christmas event, is a seasonal RuneScape holiday event. It was announced in the December 2011 Behind the Scenes and was released on 20 December 2011.[1] The event focuses on the wizards of Wizards' Tower. Players are able to party with the wizards and play in the snow.[1] Rewards for the event include a Chaotic Cookery emote based on making a feast using a cannon, a Christmas wand and a new pet for members.[2]

To start this event, talk to Wizard Sinterklaas outside of the Wizards' Tower south of Draynor Village. Agree to help him, then go through the portal against the wall of the tower.

The portal takes you to a copy of the Wizards' tower. Enter the door of the second tower and talk to Sedridor. He will ask you to wait in the library because you're early. Tell Sedridor you're there to help and he will explain that he does need it, because all the other early arrivals (wizards from the Wizards' Guild) are only there to criticise. He will tell you who needs help and where.

During the quest if you talk to Sedridor he will explains the reason why there is a second tower, i.e. that the wizards are lazy and didn't want to both set up and tidy away, so they're going to set up in a pocket dimension for the feast and then destroy the dimension afterwards.

Isidor can be found in the basement of the tower. The player needs to help him cover the floor of the banquet area in snow by placing snow emitters.

When placed, the emitters shoot snow in four directions, blocked by furniture and bricked edges. Removing an emitter also removes the snow it placed. You can also click next to the snow it emitted for it to be removed, but as before, do not click directly on it. Emitters must not be placed where they can fire at each other.

You are informed with a dialogue box when you have covered the floor with snow. If you think you have finished and do not get the dialogue then look carefully for a square that does not have snow on it. Talk to Isidor before you leave or this part of the event will not count as finished.

File:Grayzag chathead (no hat).png
200px
Wizard Grayzag, or Wizard Whitezag for those players who have completed the Void quest series, is on the highest floor. He's standing in a corner and wearing a black robe. He's supposedly summoning some waiters. He needs help finding implings that escaped from him and his hat. There are four implings (two outside the tower, and two inside).

Note: The oak tree imp may or may not have the summoner's missing hat. 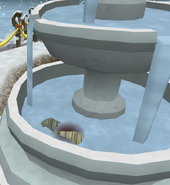 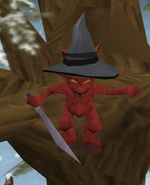 When you have sent all the imps home, go back and report to Grayzag/Whitezag. You will suggest using snow imps as waiters, to which he will exclaim that it is a great idea. Then he will suddenly claim that he already was going to use snow imps and will say that it was his idea all along. Once the dialogue is over, you will receive credit for Grayzag's/Whitezag's part of the quest.

Go back to the basement.

Kris and Kringle are chefs hired to handle the catering. Speak to Kringle, near the cannon, and he will tell you to speak to Kris to find out what to do. Simply speaking to Kris will not work. They need help finding the ingredients for the Christmas pudding. Players will need to find the following: 5 Enchanted christmas puddings, 2 Dragon's eyes, 2 Lesser demon claws, and a Christmas spirit.

Once you have retrieved all the items, head back down and talk to Kris. He will then tell you to go talk to Kringle. Kringle will tell you to add the ingredients to the cooking device. Add the ingredients to the "cooking device" in the order: Christmas puddings, Timmy's claws, dragon eyes, dwarven spice (found in barrel nearby), and Christmas spirit. Kringle would stop you if you try to add them in any wrong order. Talk to Kringle and watch him cook (a short cutscene will play).

After the cutscene, you have to talk to Kringle again or it won't count as completed (all the way through "With pleasure"). He will say that he is a better cook than Humans and that his pudding is delicious.

Wizard Sioncorn, located on the top floor, is a Fairy wizard who needs you to help her get some decorations out of the attic. It seems that the decorations have come alive due to leaked magic from being in an attic full of powerful magic artefacts, and they keep trying to escape from her. While she carries a box to the portal, grab the decorations that jump out. They include Tinsel Snakes, baubles and balloon animals. The baubles are the hardest to catch, being small and bounces up and down rapidly. If more than six decorations escape, Wizard Sioncorn would teleport away, saying that they are everywhere. You must go through the portal to return to the Wizards' Tower, and talk to her to try again. If you fail, the decorations could still be grabbed, but this does not help in any way.

Do not stand in her way. She can't walk through you, so you'll need to keep the decorations in check for longer.

Note: It is suggested to do this in low graphics if you are prone to lag issues so you can pick up all the gifts before she leaves the room.

Go speak to Sedridor again to tell him you've finished. A cutscene will start, showing the wizards gathered around the table. An argument will break out between Grayzag/Whitezag and Frumscone, which Sedridor will teleport to a separate room. Quest complete. After the Quest is complete if you have your Ice Amulet from the Christmas 2008 Event, you can summon your Snow Imp from the Land of Snow to join you at the Banquet dinner.
Progress has been made in the dining room

After the quest, you can enter the chamber that Grayzag/Whitezag and Frumscone were teleported to so you can fight for one of the wizards' snowman army. You can grab snowballs from one of the teams' snow piles and make snowmen using the piles on the battlefield. You can also throw snowballs at snowmen on your team (or the other's) for ten points of healing. There is also a counter at the top of the screen showing how many snowmen each side has escorted to the other side. Upon reaching the other side, a snowman will wait until a snowman is summoned on that space, when it will melt to make room. If you have your snowglobe from the Christmas 2007 Event then you can shake and use it to fill your inventory with snowballs, which allows you to make snowmen easier during the battle. 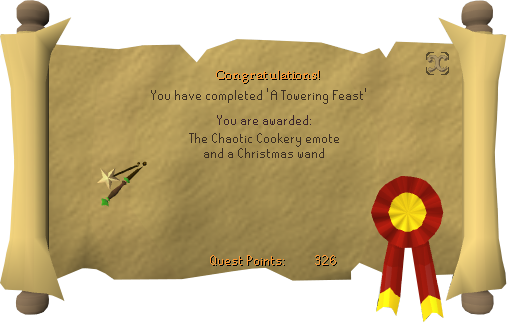 The Wizards tower during the event.

A player dodging a piece of food.

You can slide around on the ice in Falador park.
Click an image to enlarge

Retrieved from "https://runescape.fandom.com/wiki/2011_Christmas_event?oldid=5074043"
Community content is available under CC-BY-SA unless otherwise noted.