The event is split into two different quests, with one being members only. There is the "Holly" quest and the "Hawthorn" quest, the latter of which can only be completed by members. As such, each quest yielded its own rewards.

There are two areas in the Land of Holly and Hawthorn: Holly, the Queen of Snow's area, and Hawthorn, the area of the Queen of Sunrise. In Holly, it is winter - snow has fallen on the ground, and the trees are laced with snow. In Hawthorn, it is spring - the ground is covered with grass and flowers.

To do this, find the current evil holly tree in the holly area. You can chop it, but if it is not fully grown, nurture it until it is. (It will take three minutes for the Evil Holly Tree to grow.) Once you have interacted with the evil tree (or its roots) at least once by either nurturing, chopping, or burning it, and it falls (i.e., dies) you can collect a reward by interacting with the fallen tree, as with a normal evil tree. (However, no matter how you interact with the tree, it will take 7 minutes until it falls/dies.) Your reward will be the Year; take it to the Queen of Sunrise.

It's not the real Year!

After a cutscene in which the Queen of Sunrise attempts to turn winter into spring by performing Invoke Spring and fails, subsequently discovering that the Year you obtained is not the real Year. She has a new assignment: retrieve the true Year.

To obtain the true Year, you must first talk to the Stone, River, and Cloud spirits to obtain keys of their elements. They are found to the north-east, south-east and north-west, respectively. To obtain the keys, ask each spirit how the player can obtain the true Year. The spirit will give a cryptic hint depending on its element (e.g., the River spirit will say that it is submerged in deep water, while the Cloud spirit will say that it is high in the clouds) and then give you a key of their respective elements. They explain that the key will help you find the true Year. It is required to get all the keys.

The area where the Cloud spirit resides

The area where the Stone spirit resides

The area where the River spirit resides
Click an image to enlarge
After you have obtained all the keys, head south-west of Holly. You will see that the river ends abruptly with a boulder in the way. Use the Stone key on the boulder to make it disappear, opening the entrance to a cave. Enter it.

The river is still flowing inside the cave. Follow it and you will see a large pool of water with bubbles forming in the middle. Use the Water key on the area with bubbles, labelled "pool". The water will then drain away, exposing a tunnel beneath the pool. Climb down the nearby stone wall and enter the cave.

Follow the tunnel and you will see another pool of water with steam forming in the middle. Use your Cloud key on it. The player proceeds to jump in, blasting him/her up through the ceiling and into another room.

The pool with bubbles before using the Water key

The pool with bubbles after using the Water key

You will appear in a room with the Queen of Snow sitting, surrounded by ice, with a large block of ice nearby. Talk to her, and ask her about what she is doing there. She explains that it is the only ice cave that hasn't melted, due to the transition from Winter to Spring. Exclaim that she has the Year. Don't command her to give you the Year, however, because she will say that she is a queen, and that you have no right to talk to her like that, which will be proceeded by the conversation ending.

She admits that she stole the Year. She then explains that she can only see Winter, and anything else is dark and empty, and she can't understand why anybody would want a world like that. She only stole the year to protect the world from becoming barren and empty in her eyes.

Tell her that you could help her appreciate Spring. She says that she would like that, but that you would have to carve what you want to show her out of ice, because that is all she can see. Pick up the hammer and the chisel from near the entrance of the room (Note: If you have a Golden Hammer in your inventory, the hammer will not appear on the ground). Use one of them on the large block of ice. She will then ask you what you are going to carve into the ice. Your options are:

Pick any of the options (it does not matter which one you pick; the outcome will be the same). Talk to the Queen of Snow. A cut-scene will play, in which she stands up and begins to contemplate your sculpture. Depending on which sculpture you carve, it yields a slightly different reaction from the her, but this is irrelevant, and the quest progresses as normal regardless. She also mentions that she will find an appropriately cold place to place it on display - you can find it next to the Windswept tree near the fairy ring with code DKS.

She then says that the player made her believe in Spring, and that she feels okay about passing the Year on. She then exits the room to a ledge outside and disappears in a shower of snow.

After the cut-scene, you appear back near the Season Tree, with the true Year in your inventory.

The Queen of Snow sitting alone in the last ice cave.

The Queen of Snow disappears in a final shower of snow.

The Easter Bunny sculpture next to the Windswept tree.
Click an image to enlarge

A cut-scene plays where the Queen of Sunrise attempts to turn Winter into Spring by performing Invoke Spring again, and succeeds. Quest complete! 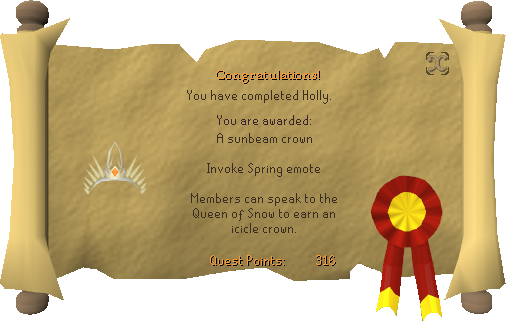 To do this, find the current Evil hawthorn tree in the Hawthorn area. If it is fully grown, you can chop it, but if it is not fully grown, nurture it until it is. Once you have interacted with the evil tree (or its roots) at least once by either nurturing or chopping, and it falls (i.e., dies) you will get a confirmation message that you have defeated an Evil hawthorn tree. Go back and talk to the Queen of Snow.

The Queen of Snow will say that she sensed that you had killed an Evil Hawthorn tree. She will thank you for fighting for her. She will then give you the Icicle crown. Quest complete! 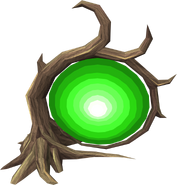 The portal to the event 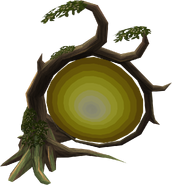 The portal when spring has come

The Queen of Sunrise invoking spring

A still of the land

A view of the trees

Players working together to cut down an evil holly tree 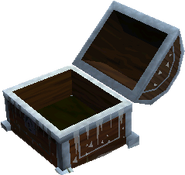 The bank chest in the event.
Click an image to enlarge

Retrieved from "https://runescape.fandom.com/wiki/2011_Easter_event?oldid=20829201"
Community content is available under CC-BY-SA unless otherwise noted.