Deathcon II, the 2011 Hallowe'en event, was released on 17 October 2011 and ended on the update of the morning of 7 November 2011. The event consisted of three puzzles that had to be solved and featured Living on Borrowed Time as the emote reward and a Deathcon lanyard, a Deathcon t-shirt and an hourglass item rewards, the last being members-only. The event could be started at the western end of the Clan Camp. Players could bring Eek for additional dialogue. The event was open to everyone, free players and members alike, having had a run time of three weeks.[1]

To start the event, talk to Frank to the west of the clan camp. He will tell you about the Deathcon and how he needs your help. He will give you a Deathcon lanyard.

Go through the clan portal to the east of Frank with the Lanyard and select the option to enter the deathcon. You will now find yourself in the Grim Reaper's Citadel.

From the portal, follow the path to where you see a moving statue named Beauty. Talk to her and she will tell you that you must set up statues as decorations. The first stage of this is picking a statue for each clan member. She will describe what each member likes and you must select the appropriate creature for their statues. The correct responses should reflect the creature in the list below, otherwise, you get a description of the incorrect creature and Beauty gives you a chance to try again.

After the correct statues have been chosen for each member, you must go to the welcome portal to place the statues. You must place them in the correct spots based on the information given by Beauty about their preferences.

Facing North, starting at the top, and moving right to the middle, then down and left to the South:

You must speak to Beauty again before you can enter the Grim Reaper's tent.

From the portal, go West down the path, then North to the Keep. Head upstairs and talk to Infinity to start the puzzle, who is the spider DJ presiding over the dancefloor in the party room. Note that the staircase is located on the south-east and south-west corners of the keep.

Infinity will tell you that help is needed to turn on the lights underneath the dancefloor in order to create a picture on it. You will be given an Dance floor manual with instructions as to how this can be done.

The dancefloor-puzzle is a nonogram. Step on it to activate the puzzle and make some numbers appear on top and on the left of the floor. The image on the right shows the completed image.

Clicking on a tile causes you to go and stamp on it to turn it on. Only the tile that you click on will change colour (not all that you step on, as is the case in some common puzzles). If you accidentally light the wrong tile, clicking on it will turn it off again. If you use the solution given, you have to stomp on all the tiles which the picture to the right shows. They can be done in any order, so simply clicking on all the red tiles as shown on the picture should do the trick.

There are numbers alongside the dancefloor. Each set of numbers describes a row or a column, in terms of how many red tiles there are in it. A single number means that there is a single blob of x red tiles, with no spacing in between, for example 6 means there are six red tiles in a row. Several numbers mean there are several blobs of red tiles, with spacing in between, eg 2,4,2 means there's two tiles in a row, a gap, then four in a row, another gap and then two in a row again. However, the spacing between the tiles can be of different length.

Go to Frank on the roof. He needs help in lighting the fireworks on top of the roof. To do this, you must instruct his chicken (named Horses) in order to get him to reach and light each of the fireworks. Horses moves like a knight in chess except he cannot jump over obstacles (two steps forward and one to the side, in any direction).

To move Horses, simply click on the tile you want him to move to. Remember, Horses can only move in an L-shape direction. Clicking on a tile he cannot reach in this way will not cause him to move.

This puzzle can be solved in 19 steps going to all four fireworks in one path. See the above image for the path taken to set off all of the fireworks. Note that the camera angle is facing north.

Once all three clan members have been helped, talk to Death in the R.I.P. Tent, near the notice board. He will give you your reward: A Deathcon II T-Shirt, an hourglass wielded as a shield (if a member), and the Living on Borrowed Time emote. 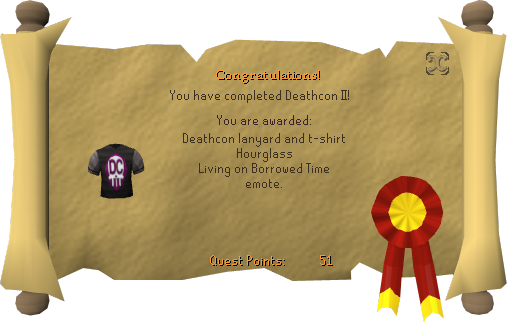 As announced on the notice board a special event was launched at 29 October. The player can enter the theatre at the top floor of Death's citadel. During the event players will need to find the answers to a series of questions in the Runefest puzzle book and find the correct numbers of the questions that spell the word "PASSWORD". If the player answers it right to Fame, the player will be rewarded with a sock/buskin mask.

A golden scythe was also rewarded to the first 25 RuneFest attendees to complete the puzzle, making it about the rarest item in the game.

The Welcome Area in Death's Citadel.

War + Peace XX can be found engraved on the tree.

The party room. One of the cosplayers heads has fallen off.

The fireworks on the roof of the theatre.

Death giving a speech at the Clan Theatre.

Unique dance performed when standing on the dance floor