Festive Cheer was the 2014 Christmas event which was subdivided into four different activities, released on each of the first three weeks of December.

This activity could be started by talking to Santa Claus at the Lumbridge crater.

Players were assigned to aid Santa Claus with delivering his presents. With that, he would provide the sack of presents, essential for helping him with his present delivery.

By clicking the sack given, an interface opened showing 16 different NPCs. Selecting any one would reveal their current location. Once a target was set, players had to head over and talk to the selected NPC to give them their present. Completing the task granted the player 25 cheer points, a type of cumulative currency collected for the rewards shown in the Rewards tab by searching the sack given. This could only be done once per day.

After delivering the present, one festive paper would be received, which could be handed in to Santa for a festive lamp; a lamp rewarding experience in any chosen skill.

Once a total of 250,000 festive papers (spread across all servers) were turned in, a broadcast message was announced in every player's chatbox.

By then, players could head to the Lumbridge crater to contribute in pulling the giant cracker. The cracker had 1,000 life points, and required players on both sides to be exploded quicker. 1 life point per 2 seconds was deducted for every contributing player, whilst having a balanced team on both sides resulted in a deduction of 2 life points per 2 seconds per character.

Successfully breaking open the cracker revealed a chest, which could be looted by anyone for another festive lamp, a Christmas cracker joke and an additional 50 cheer points. The emote Cracker Pull was also unlocked for the player's first cracker looted. The cracker reset after 30 minutes, regardless of whether it was successfully pulled or not.

After the event's removal, the Cracker Pull emote was awarded to all players who had handed in at least one festive paper. However, the festive lamp and Christmas cracker joke were not compensated.

The start of something massive to come.

Does it look festive yet?

Does it look festive yet?

Looks like you'd need an army to pull this.

Merry Christmas - get yer loot on!
Click an image to enlarge

This activity was a members-only distraction and diversion-esque activity which took place every three hours at Varrock Square. Clicking on the central Christmas tree informed the time remaining until the next round, unless there was less than one minute left, in which case it displayed "The next event is starting soon!". Once the event was ready, players had to click the central Christmas tree to start. Each round lasted half an hour.

The aim of the event was to hunt down as many tinsel snakes that are wandering around nearby and lead them back to the tree. One can create a train of up to 10 snakes to be led back. Only one train of tinsel snakes may be led to the tree regardless of the number of snakes. This must be done quickly, or the snakes would wander away along with the message: "Your decorations lost you and ran away!"

Once the tinsel snakes were returned to the tree, up to 20 cheer points could be earned per day from the activity. Summoning experience was also gained based on the number of snakes turned in, in respect to the player's current level applied with any bonus experience. Players with a Summoning level of 5 and below were prompted a confirmation message to whether the experience was wanted. Experience gained in this activity did not have a limit per day and could be done as many times as desired. Additionally, turning in a line of 10 tinsel snakes unlocked Sparkles the pet, if it hadn't been unlocked during the original 2011 Christmas event.

This activity involved taking down a unique seasonal boss known as Snowverload, and was only available for members. It spawned every 3 hours, in sync with the Guthixian Cache and Tinsel Snake Hunt at one of these locations (different for each world):

Once Snowverload was found, players had to team up and defeat it using only snowballs, as it was the only weapon that damaged it. Snowballs were gathered by right clicking Snowverload, and must be equipped to be functional. It used an array of unique attacks that hampered the player's performance in defeating it. As Snowverload's life points decreased, it shrank in body mass, gradually becoming smaller in size. Once Snowverload was reduced to the smallest possible size, players were unable to extirpate it as replenished life points once it reaches 0. At this stage, Snowverload had to be lured to Santa Claus at the Lumbridge crater, as he was able to melt Snowverload to its end once players reduced its regenerated life points back to 0.

Successfully contributing to this activity granted all participants two pieces of festive paper, the ability to deliver another present on the same day, and reset the daily cheer points cap from Tinsel Snake Hunt. Seasonal food turkey drumstick, roast potatoes and mulled wine were also distributed to all participants.

A player melting a snow spirit.

This activity could be started by talking to the Queen of Snow south within the Lumbridge crater, next to the snowboarding ramp.

Players were assigned to hunt down snow spirits, scattered various locations across Gielinor, and melt them down. The Queen of Snow hinted the locations of the snow spirits for each player. Snow spirits did not wander off their spawn locations and did not show the conventional yellow dot on the minimap but instead, showed the Holiday Event icon on the world map.

Each player was given a total of 4 snow spirits to melt down, and locations varied for every player. The 8 possible locations hinted are as follows:

Once all 4 snow spirits have been melted, the Queen of Snow rewarded the player a snowboard.

Players could start the Snowboarding activity via right-clicking the Queen of Snow once the snowboard was equipped. The player would then be placed on top of gnome jumpship, which could be jumped off any time. Before jumping off, the player was prompted with the Snowboarding Jump interface. On the left, presents were shown to contain a selection of gems based on their present colour, which containd the power required to perform tricks shown on the right. Players chose a desired selection of tricks, which filled up the power bar shown on the bottom-right, whereas choosing all four tricks filled the bar up to 100%.

Pressing the Jump button had the player descend the ramp. During this moment, different coloured presents containing different amount of power appeared on the player's screen. Quickly clicking on them filled the vertical power bar that was now on the left side of the screen. Once reaching the end of the crater, the player performed the tricks that were preselected depending on the amount of power collected.

Reputation (stylised as "rep") was gained from snowboarding ramps, and was based off the successions of tricks, with tricks requiring higher power granting more reputation. Each board started with a reputation 0 and restarted as a snowboard was upgraded. Players could check their reputation by right clicking the snowboard in the inventory or in the equipped items screen. Reputation was needed to upgrade to higher tier snowboards. Excess power granted 0.2 reputation for each percentage. However, failing to get 100% power needed for all tricks could result in a large penalty on reputation gain. Power was capped at 150% if fewer than 4 tricks were selected. Achieving under 100% power gained experience approximately less than half gained from 100%. For instance, completing tricks 3/3 gave around 210 reputation, but tricks 3/4 only gave around 130 reputation; while completing 2/2 tricks granted around 170 reputation, completing 2/3 tricks granted around 90 reputation instead. Once players acquired snowboard tier 6, they were given the ability to re-skin their snowboards with one of three different designs.

Agility experience from this activity was gained depending on the player's snowboarding performance (and level), and stacked with any bonus experience. A trick requiring higher power boost (or a combination of tricks) resulted in a higher experience reward.

Players could also grind the grind rails, situated west within the Lumbridge crater. To start, players had to run-up the wall of the watchtower north-west of the crater. On the railings, players must attempt to balance themselves using either the arrow keys on the keyboard or the arrows next to the meter interface on the screen. The meter itself was visible on the screen while grinding, which informed the balance nature of the player during the grind. The meter changed colour depending on how well-balanced the player was on the railings, with green being safe, orange being imbalanced and red being close to falling.

When the meter interface arrow needle was shown to tilt towards one side, players had to counteract the direction by clicking (or pressing on the keyboards) the opposite direction to rebalance themselves. If the arrow needle was tilting towards the left, players had to hastily counterbalance by clicking right arrows and vice versa. A gap existed in between two railings halfway through the course where the player attempted to perform a jump.

Reputation and a fixed amount of Agility experience (based on the player's level) was gained after completing grinding rails. Aside from that, 10 cheer points were also earned from each successful run. 20 cheer points were earned if the player completed the course with perfect balance during the jump sequence.

In addition to the main event, players could participate in Oxfam's 'Unwrapped' event in support of the Oxfam charity. By donating in-game bonds to Thorvar Crittersmash near the Lumbridge, Edgeville, Burthorpe or Prifddinas lodestone, players received various rewards as a symbol of gratitude for their good cause. For the first 5 bonds donated, players received different rewards. Additionally, players also received another unopenable Oxfam present for every bond donated, which may be traded to another player for them to receive 2 Treasure Hunter key tokens.

The number of bonds donated by a player was also recorded as one of December's Seasonal HiScores.

Aside from that, some other minor Christmas changes were made to the game during the duration of the event. Lumbridge crater, Varrock Square and Burthorpe bank were covered with snow and decorated with a Christmas tree.

A number of boss monsters wore a Santa hat during the month, with Vorago and Nex also receiving additional changes. Affected bosses are listed as follows. 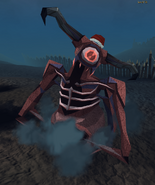 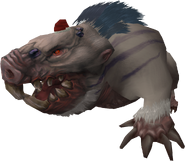 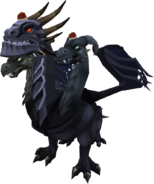 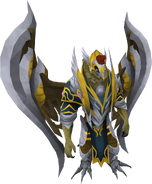 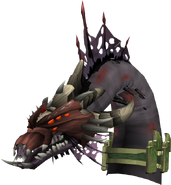 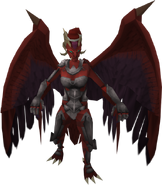 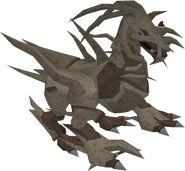 Cheer points were the event's cumulative currency, earned via all the Christmas event activities. A maximum of 500 cheer points could be earned. These points were required to unlock rewards when the correct amount had been achieved. Rewards requiring cheer points included:

The Present Delivery activity also rewarded a festive lamp after handing in any festive paper to Santa Claus. The Giant Cracker activity rewarded the player the new Cracker Pull emote upon the first time looting the chest of a giant cracker, along with the usual previous Christmas emotes the player has yet to unlock. Looting the cracker also awarded a festive lamp and a Christmas cracker joke.

The Tinsel Snake Hunt activity also awarded Summoning experience based on the amount of snakes. The tinsel snake pet Sparkles was presented to the player if a train of 10 snakes was returned to the tree, given that the player has not owned one.

Defeating seasonal boss Snowverload also presented a turkey drumstick, roast potatoes and mulled wine to the player, and two festive lamps after turning in both festive papers. Players could also deliver another present on the same day, and play more rounds of Tinsel Snake Hunt for more cheer points.

Hunting down and melting all snow spirits assigned by the Queen of Snow rewarded the player with a snowboard. Snowboarding on the ramp or grinding rails granted reputation necessary to upgrade snowboards. Furthermore, Agility experience was also awarded dependent on the successions and total power accumulated of the tricks selected.

Retrieved from "https://runescape.fandom.com/wiki/2014_Christmas_event?oldid=20972796"
Community content is available under CC-BY-SA unless otherwise noted.