The 2016 Easter event, officially named Sliske and the Chocolate Factory, involves assisting the Easter Bunny in Burthorpe to investigate Sliske's chocolate factory. The player has to catch a chocolate butterfly to find a golden ticket and be invited on a tour of the chocolate factory.[1][2]

During the tour, the player has to make sure other NPCs on the chocolate factory tour stay safe, including Farmer Jimbo, Farquie the Cleaner, Gilly Willikers, and Wendy. Guthixian butterflies also returned during the event. Rewards include a new emote, the ability to catch 5 more Guthixian butterflies a day, and an everlasting gobstopper.[2] There are also some Invention related rewards from the event; players who do not have access to the skill are able to save these rewards to use at a later time.[3]

The event can be started by speaking to the Easter Bunny just north-west of the Burthorpe lodestone. He informs the player that Sliske has opened a chocolate factory in the Empyrean Citadel and is making white chocolate. Sliske has also given away golden tickets for a tour of his chocolate factory, which can be found by anyone who catches a chocolate butterfly. The Easter Bunny wishes to investigate what Sliske is up to and has found the last chocolate butterfly. However, he cannot be seen at the chocolate factory himself as it will be too obvious that he is investigating, so he requests that you catch the butterfly for him.

Catch the chocolate butterfly then use the golden ticket to teleport to the factory. The Easter Bunny shrinks down to a small size and sits on your shoulder so that he may accompany you without being seen.

On arrival, Sliske will be awaiting with miniature versions of the Barrows brother wights, along with the other guests: Wendy, Gilly Willikers, Farmer Jimbo and Farquie the Cleaner. Speak with Sliske to begin the tour.

Speak to the miniature Ahrim the Blighted to enter the first room for a cut-scene. Sliske will chat and explain the room to you - it is a dairy room where the milk for the chocolate is produced. There is a hole in the middle of the room where food delivery is made, with a conveyor belt to deliver the food to the dairy cow. There is also a conveyor belt to take milk from the cow to a condensing machine before it moves onto the next part of the production process. He notes that the milk is not completely white so some titanium white is added to the milk.

On hearing this, the Easter Bunny grows concerned about the safety of what Sliske is doing. However, the other guests are clearly enthused by the experience so would not support any confrontation. It is therefore suggested that the other guests need to be removed from the tour to safety, one by one.

Speak to Wendy and suggest that she take a look down the hole. She will move into place near the giant hole, just in front of the conveyor belt.

In the south east corner of your map, there are 2 levers. Pull both down and you should see a milk churn on the conveyor belt heading towards Wendy. The milk churn will hit her and she will fall through the hole. Another cut scene follows.

You can move onto the next room.

Talk to the miniature Dharok the Wretched to start. Sliske will explain that in this room is a chocolate duplicator, which makes a chocolate copy of anything that standing in the centre of the room and is operated by a machine named T.A.R.A.

Talk to Farquie the Cleaner and he will agree to stand in the centre of the room to be copied. Next, click on the T.A.R.A. in the south-east corner of the room to operate it, and a puzzle will appear. The puzzle is random for everyone, and requires the tiles to be rearranged to form the correct picture. There is a 'hint' option in the top left corner to give a guide as to what the completed image should look like.

The puzzle can be completed with the same strategy as a standard puzzle box obtained from a clue scroll. When the puzzle is complete, simply close the puzzle window.

A cut-scene will play in which the Farquie the Cleaner will become completely immersed in liquid chocolate. He will need to be helped out so cannot continue the tour. Move onto the next room.

At the entry to the third area, speak to the miniature Karil the Tainted. Sliske will request that the guests all step through the portal at the door. Upon doing so, everyone will be transported to the central portal and appear to be upside down. Sliske will explain that the area is used to make triple-folded chocolate, wherein the chocolate is transported through the portals to fold it.

Sliske will then request that everyone step through the portal to move onto the next area. Instead of doing so, Gilly Willikers pulls the nearby lever, stating that he does not want to miss out on the opportunity to try out the triple-folded chocolate. The Easter Bunny suggests that this could be an opportunity to remove Gilly Willikers from the tour, so you should agree to help.

The simplest solution is to keep passing through the portals, pulling the levers whenever you come to a room that has one (ignore the lever that is stuck). Eventually your chocolate bar will have (uif) to indicate that it has been folded in three ways.

Take the triple-folded chocolate back to the centre portal with Gilly Willikers and give it to him. Upon eating the chocolate, he will disappear from sight. Step into the portal to move on to the next room.

Speak to the miniature Torag the Corrupted to enter the next room. Sliske will explain that the room is for production of a new fizzy drink, Eagleade, which is lighter than air. He also explains that they have yet to decide which size of bottle to ship the drink in, with three different sizes in consideration. Farmer Jimbo is still feeling sick from the previous room and thinks a drink might make him feel better. The Easter Bunny suggests that giving the drink may keep him occupied, so it would be a good idea to fill all three containers for him to choose from.

Head back to the entrance and speak to Sliske. He will tell you that he knows what is going on and is aware that the Easter Bunny is with you. The Easter Bunny returns to normal size and tells Sliske that he is here to shut down the factory. However, Sliske will proclaim that it is too late, revealing that he has gathered the other guests in his office and fed them wight chocolate, turning them into wights. Sliske then returns to his office, awaiting your presence.

The Easter Bunny suggests that there may be a way to save the guests - by feeding them more wight chocolate, causing them to become nauseous to the point of being sick.

Traverse the maze, grabbing the chocolate from the shelf near each wight and throw it at them to free them. You can attempt the maze in this order.

After this, confront Sliske, who will teleport away. Talk to the Easter Bunny to finish the event and receive your rewards. 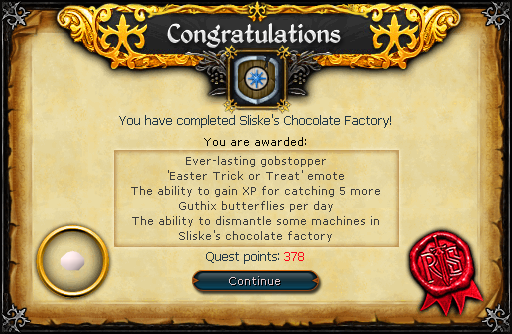 Event complete!
The quest complete jingle for the event.

For completing the event you will receive:

Retrieved from "https://runescape.fandom.com/wiki/2016_Easter_event?oldid=16400370"
Community content is available under CC-BY-SA unless otherwise noted.