Invention of Disaster is the 2016 Hallowe'en event. It was released on 24 October and is playable for 2 weeks. Players do not have to meet the requirements for Invention to take part in the event. Invention of Disaster explores what the Invention skill is like in the alternative realm of New Varrock, previously visited in Dimension of Disaster. In this realm the player is able to disassemble living things and see what Falador is like with the black knights having won the Invasion of Falador. The event involves Iron Doc Mk IV, who the player helps with a plan, and Dr Fenkenstrain's brain.

In the alternate dimension

Enter the dimensional portal outside the Invention Guild. The event is begun by talking to Dr Fenkenbrain on the table in the guild. He will instruct you to accomplish tasks in 4 rooms which, when completed, will have caused the creation of a construct which you will then test to see if it is fit to defend the dwarves.

In the west room you will sort body parts by throwing them into a hopper. The parts are located in 4 hoppers and a spotlight will shine upon the one which has the currently needed parts. You need to sift through 25 correct body parts to reach 100% completion. This gives Cooking experience at the rate of 71.2 experience every 7 ticks at level 99 Cooking, and every instance of experience gain gives 4% progress.

The north-west room has you pedalling a silver penny farthing to move a conveyor belt along the process. You must change pedalling speed as required. This gives Firemaking experience at the rate of 44.7 experience every 4 ticks at level 99 Firemaking, and every fifth instance of experience gain gives 5% progress.

The north-east room requires you to control the flow the anima god energy of Armadyl, Bandos, Saradomin and Zamorak (labelled as good, bad, lawful and chaos energy), using Divination. Turn on the valves for all anima energy holders and the divine material will begin automatically. You need to stabilise the flow of anima; the holders can either stop flowing or have too much pressure in them. Interact with the valve to get the pump flowing, and the lever to depressurise the energy holders. This gives Smithing experience at the rate of 41.9 experience every 6 ticks at level 99 Smithing, and every 15 ticks when gaining experience 5% progress is given.

The final room, to the east, has a track upon which you must walk to build up an electrical charge to power the construct. If you have any boots worn at the moment, take it off. You will then run a small electrical track; stay on the inner track to quickly charge up the construct. From time to time, various objects will appear on the track, which will reduce the amount of energy you can charge on the tracks for 3 laps; switch to other tracks to avoid them. 12 laps in the inner track (you can move out without penalty) will create the needed charge.

Once all four procedures are done, you can now test the god construct. Much like Telos, the construct is idle until you get near it. The construct will become enraged with your "reckless tampering" of divine energy and attack you. The construct has 99,999 life points despite having a combat level of 1.

All deaths against the construct are safe - you will respawn outside and can simply try again.

All damage the construct does is scaled to your maximum health. Being hit repeatedly by the same attack sometimes increases the damage of the attack.

The following attack is always used:

In addition, the god construct uses two randomly chosen attacks with the transition happening when the god construct reaches 50,000 life points. During the very first kill the first attack is always tornadoes followed by the explosion attack.

The Iron Docs are working on a side project: building a mechanical spider. In order to complete it (and receive it as a pet), you must collect the 8 spider legs scattered around the dimension.

When holding all eight legs, Dr Spider MD can be bought from the reward shop for 500 grey matter. If you have given your legs to the Iron Doc outside the door, that counts for "holding" the legs. 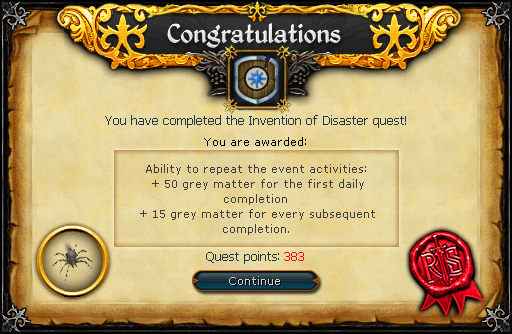 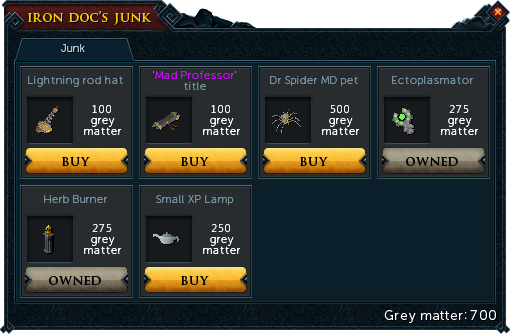 Retrieved from "https://runescape.fandom.com/wiki/2016_Hallowe%27en_event?oldid=20884315"
Community content is available under CC-BY-SA unless otherwise noted.