The 2017 Christmas event is a four-part event released on 11 December 2017. After the events of November, Santa's favourite toy - the clockwork gnome - has been reassembled. With the player's help, he wants to bring the toy gnome to life, giving it the greatest gift of all this Christmas.

As well as the main event, players can take part in a number of other activities including winter weekends and the Christmas advent calendar.

Festive scenery was also added to the Grand Exchange, Prifddinas, and the Max Guild.

Start by talking to the Queen of Snow at the northern part of the Grand Exchange. She will be distraught about the disappearance of her husband, Santa Claus. She says Santa has been complaining about the odd lack of children in Gielinor and how most are naughty, and therefore is trying to create the 'perfect child'. She says Santa was seen at the grand exchange trying to sell his old santa hat. She also mentions that Rudolph is missing.

She will then ask you to talk to Orla Fairweather, Aubury and Doc if they had seen anything. All three can be found within several paces around the Queen of Snow. Orla, Aubury and Doc all say that Santa wanted to know how to animate his clockwork gnome to become a "real boy".

After talking to all three of them talk to the queen once more.

She will then ask you to go talk to Thurgo, as she believes he has more information on Santa's whereabouts. He can be found south of Port Sarim near Mudskipper Point; bring a redberry pie, or Thurgo will not help you.

Give Thurgo the redberry pie, in exchange for which he will tell you that Santa has been looking for a way to upgrade his clockwork gnome. Thurgo says that he directed Santa to the Queen Black Dragon to try and use her incredibly hot breath to bring his creation to life. The lair for the queen black dragon can be found north-west of the Port Sarim lodestone. It is easily recognised because of the white knights camping outside.

Inside her belly, you find Santa and the clockwork gnome trapped inside sacs. You will free both of them and return back to the platform. Santa will be distraught to find that Rudolph has been killed and his sleigh damaged. He will ask you to pick up Rudolph's ashes, which can be done by interacting with them. After giving the ashes back to Santa, you will be teleported back to the Grand Exchange.

Back at the Grand Exchange, the player will be asked by Santa to speak to Doc, Aubury and Orla in order to carry out his research.

Doc thinks that by blasting the clockwork gnome with a lot of power, he will be able to bring him to life. To help him out, give him the 100 pale energy he asks for. After that, he will ask you to tinker with the power generator until the generator damage has been reduced to 0%. After that, he will ask you to continue to tinker with the generator until the control panel starts to smoke. Once it starts smoking, press the control panel to repair it.

Before testing it out on the clockwork gnome, he will ask the player to test it first. It will work on the player, but ultimately not on the gnome.

This activity will grant you Crafting or Smithing experience, which as after and before the quest, can be toggled through the right click menu, selecting the Configure option.

The anomalies will not appear until you charge the energy rift to 100%. Once anomalies start appearing, you can seal them without interrupting the process of charging the rift. After all 15 anomalies have been sealed, talk to Aubury once more. He will ask for 10 pure or rune essence. He will use these essences to try and make the clockwork gnome into a real child, but will ultimately fail.

This activity will grant you Runecrafting or Summoning experience.

Orla will ask you to carry out a trade with a Menaphite smuggler. She will require 12 raw lobsters. She will ask you to meet the smuggler east of Al Kharid, in the same area as desert strykewyrms. Teleport there using the Al Kharid lodestone, or a charged amulet of glory. Or if you have the Mask of the Yellow Wyrm, you can teleport directly there.

Once the smuggler has been met, give him the 12 raw lobsters. He will tell you to take the obelisk, at which point Orla will interrupt the conversation and offer to teleport you and the obelisk back to the Grand Exchange.

At the Grand Exchange Orla will ask you to siphon the obelisk. To do this, interact with the obelisk. A gauge will appear on the screen. Using the left and right arrow keys on your keyboard (preferable, since tapping on the arrow keys allows greater control) or using your mouse cursor on the arrows on the sides of the gauge, align the pointer inside the circle with the small mark in the centre at the top of the circle. Repeat aligning as you siphon until percentage is complete.

Once the obelisk reaches 100% soul absorption, Orla will attempt to use its power to bring the clockwork gnome to life, but will once again fail.

This activity will grant you Divination or Prayer experience, which can be toggled in the right click menu, by clicking the Configure option.

After all three methods have been attempted, speak to Santa. At this point, Santa will have given up all hope, at which point the Queen of Snow wonders what has happened to Rudolph. Santa explains that he lost his life in the process of finding life for the clockwork gnome. Upon asking what to do with Rudolph's ashes, Aubury suggests another experiment of bringing the ashes to the Phoenix to try and revive him. Santa will agree and offer to teleport the player and himself to the lair.

At the lair, Santa will beg the Phoenix to help Rudolph. She suggests the ritual of rebirth to try and bring him back to life again. A cutscene will start where Santa places the ashes next to the Phoenix. She then starts the ritual and brings Rudolph back to life. Santa will then ask the Phoenix whether she could use her fire to bring the clockwork gnome to life. However, following the rest of the experiments, it fails also. Santa will then offer to bring the player and himself back to the Grand Exchange.

Back at the Grand Exchange, Aubury suggests trying all three methods at the same time. This will start a cutscene of all three methods being tried at once and subsequently turning the clockwork gnome into a real gnome. Talk to Santa Claus again to finish the quest. 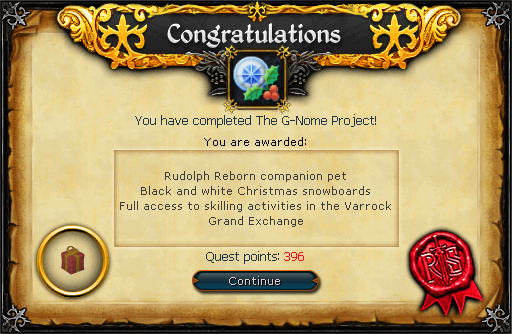 The reindeer-terrorbird racing is overlooked by Santa's head elf south of Falador. The activity is similar to Terrorbird Racing from Summer Beach Party, with seven checkpoints scattered around the southern Asgarnia.

Finishing the course awards an amount of Agility experience dependent on how quickly the course is completed. There are global and world hiscores for race completion times that can be checked on the first racing checkpoint. The global hiscores can take some time to update.

The race route is indicated by sign posts and checkpoints (

) through which the player has to pass. Teleporting and other means of getting around the course faster are permitted; all that counts is passing the gates. If the time runs out in the middle of the race, the race fails and no experience is awarded. The experience that is rewarded was based on time:

The gates along the route can be found:

Since experience is solely based on time, it is recommended to use teleports to clear the course as quick as possible. For the high scores, having other people place Prisms of Salvation along the route helps to shave off many seconds. Surging past the gates does not count as going through them since it is technically a teleport. The following technique can be used for the best possible times, with as many as possible Prisms of Salvation scattered along the route.

Finishing the race in 199.2 seconds or under rewards the player a bright reindeer-terrorbird mount.

The Grand Exchange during the event
Click an image to enlarge

Retrieved from "https://runescape.fandom.com/wiki/2017_Christmas_event?oldid=20950662"
Community content is available under CC-BY-SA unless otherwise noted.