The 2017 Hallowe'en event consists of a miniquest called Ghost Stories of Gielinor and several other activities. It was released on 30 October 2017. In the miniquest, players help Closure track down nine ghosts to collect their last moments. Ironmen can participate in the event.

To start this event, you need to speak to Closure who is located outside of Death's office, near the Draynor Village lodestone. Quick access can be gained through the various event noticeboards or the holiday portal in Prifddinas.

He will ask players to track down ghosts and collect their final moments in The Ghastly Grimoire. There are nine different ghosts that must be tracked down for Closure, located across Gielinor. They each reveal a different story when found.

After each story is collected, a chat message will inform you: You have discovered #/10 of the ghost stories.

You will also receive a ghost treat for completing a story.

Heralds of the Apocalypse

Items needed: Any kind of food, any form of water (watering cans, waterskins or holy water will not work)

Head north-east of the Edgeville lodestone, next to the Wilderness wall, to find a ghost who requires food. Upon providing her with some, the food will turn to ash. She then asks for water, which when provided turns to steam and the container it was in is destroyed. She then reveals her story, completing this part of the miniquest.

Travel to the lobby area of Daemonheim and bank everything that isn't allowed in dungeons normally except the book, and then speak to the ghost who will lead you to a dungeon. Your ring of kinship gets replaced with a blooded variant temporarily while in the dungeon. Interacting with the ghost while wearing forbidden items results in a chatbox message stating You are [carrying/wearing] items that cannot be taken into this ghost's story.

Once inside the dungeon, read the ominous journal in the north-east part of the room. Pick up everything on the tables, and mine three novite ore and pick two salve nettles. Use an air rune on the furnace, then smelt the novite ore into novite bars, and spin the salve nettles into salve cloth on the nearby spinning wheel. Whilst using the spinning wheel, you prick your finger.

The ghost can be found north of Aubury's Rune Shop in Varrock.

After speaking to the ghost, read the dark grimoire, then search the broken crate directly south of the ghost to obtain 4 undyed candles.

With the candles in your inventory, investigate the magical dye cauldron northeast of the crates. Dye the candles such that you have 1 of each colour (white, black, red, blue).

After dyeing the candles the correct answer, you must place them on the ground on the ritual circle:

By the Light of the Moon

The ghost can be found west of the Falador north gate.

After speaking to the ghost, it will move outside the Rising Sun Inn. Speak to it again and it will tell you to head upstairs, to find a werewolf in order to avenge it. There are 6 NPCs upstairs, and the available dialogue options are:

Accuse Daniel of being the werewolf, and he will transform into his werewolf form and run out of the inn. Return to the ghost to complete the story.

Wrongly accusing someone of being the werewolf will result in the death of said NPC. This has no impact on the story line.

In the same room as the ghost, pose in the mirror three times. The ghost will move to the southwest room.

Search the wardrobe in the northeast room and put on the spooky outfit. Talk to the ghost to finish this story. Simply walking down the stairs will remove the outfit.

Outside of the Taxidermist in Canifis, talk to the ghost and offer to help in order to be transported to a location full of sheep with a fountain in the middle. The goal is to get to the center with only removing 3 sheep, no more no less. Start at the 5th row down on west side and aim to get towards the west side of the fountain. The goal of this minigame is to get to the fountain and drink the water removing no more than three sheep.

After drinking from the fountain, you will be transported back and the story is completed.

Talk to the ghost in the house southeast of the Ardougne lodestone. Solve the memory afflicted puzzle (a guide can be found here). After solving it, the display will turn black and white and the puzzle will get a red hue. A monster will appear under the bed. 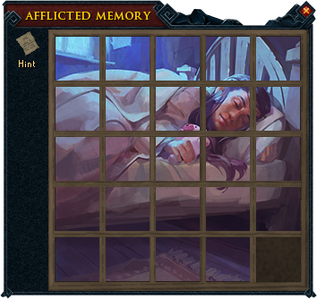 The afflicted memory before transforming into the red version 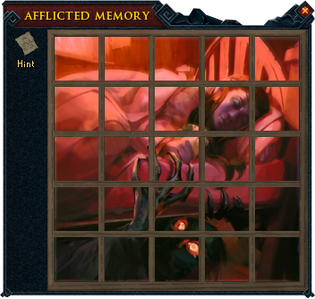 The red afflicted memory
Click an image to enlarge

Tip: Exit the puzzle and enter the puzzle until you get a message "The ghost has pieced together as much of her memory as she can." The ghost will automatically complete a row each time until the last two rows are left to solve. With last two rows, start from left side and work right, one column at a time.

Head to the ghost that's at the east end of Burgh de Rott. Talk to the ghost and offer your help. Then search the barrel, shelves and both bookcases, in the house next to the ghost for parts. Read the inventor's diary on book stand:

Talk to the ghost to finish the story.

Right next to the entrance to the Barrows area, talk to the ghost and offer to help and you will be transported into the Barrows tomb at the reward chest.

Do nothing. Don't open the chest. Wait for the scene to finish.

If you do click on the treasure chest, you will get a confirmation dialog box "Claim reward from chest?" with the options of "Yes" and "No". If you select "Yes", then you get the message "As you open the chest, all faith and hope abandons you." and you will harmlessly be sent back to the ghost next to the entrance to the Barrows area, where it asks for your help, "Show me how to resist temptation. Show me the strength of your faith."

The Beginning and the End (m)

Once you have collected all 9 stories, go back to Closure. You will be rewarded for your first 5 stories. Talk to him again and you will be presented with a quiz based on the previous stories. Note that the questions will be asked in random order. 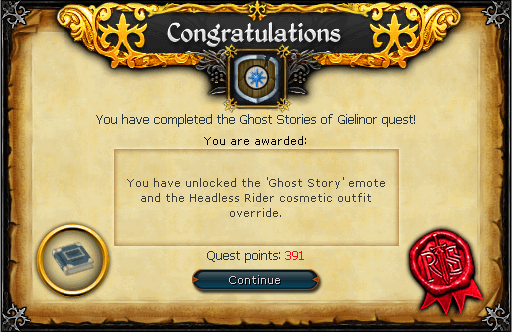 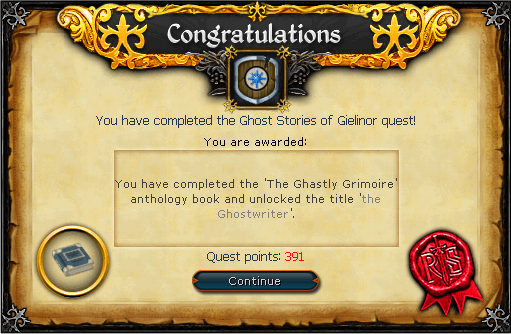 From 30 October to the end of 1 November, orange and black balloons dropped near lodestones every 30 minutes, approximately every :45 and :15 in game time. A global message was displayed two minutes prior to the drop:

Balloons will drop near all lodestones (except Prifddinas) in two minutes, as part of Gielinor's Hallowe'en celebrations!

Players could pop up to 50 of the balloons daily to receive a random assortment of the following:

It was also possible that a balloon was empty. If there was not enough inventory space when popping a balloon, the following message was shown:

Your prizes drop to the floor because you do not have enough inventory space.

As with the 2016 event, strange boy and girl could be found organising a costume gathering on 31 October.