Valentine's Event 2017 is a holiday event held in the Lumbridge Crater, released on 9 February 2017. Within this event, the player aids Wizard Deedit, who, in an experiment begun on 6 February 2017, constructed a "unity machine" intended to build up amorous energy in order to "bring about love and harmony" within Gielinor. On the release date, the machine released its accumulated energy; however, it proved to be far more powerful than Wizard Deedit anticipated, and the energy attracted many crashed devotion rocks to the surface of Gielinor, coming to rest at the Lumbridge Crater.

The event premiered on 00:00 UTC 9 February 2017 with an in-game announcement stating that

Wizard Deedit's experiment has gone haywire in Lumbridge Crater. Go talk to him to find out how you can help.

In order to aid Wizard Deedit and participate in the event, the player is tasked with earning reputation by completing any of the following tasks at the Lumbridge Crater:

Any player may surpass the 100 reputation-points-per-day limit by using devotion counteragents, which may be won from Treasure Hunter throughout the duration of the Valentine's 2017 Treasure Hunter event (with which this holiday event was paired upon release).

As a reward for participating in the event, a player may exchange their accumulated reputation points with Wizard Deedit for any of the following rewards:

Because the event only lasted six days, it was not possible to get all of the rewards without obtaining the devotion counteragents from Treasure Hunter.

The second portion of the event premiered immediately following Part I on 00:00 UTC 15 February 2017 with an in-game announcement stating that

The devotion sprites have become trapped on Gielinor, help Wizard Deedit get them back home! See the Events tab under Community for more info. This portion of the event will be available until 23:59 UTC 1 March 2017.

Each time that the player logged in during the event, they would be greeted with one of the following announcements:

Functionality of Part I of the event became unavailable as Part II started (with reputation no longer being obtainable), although Part I rewards could still be obtained afterwards with sufficient reputation. Instead, rewards from the previous years' Valentine's Day events were available from the reward boxes during Part II.

In order to aid Wizard Deedit and participate in the event, the player is tasked with gathering fabric scraps.

For training skills that aren't Crafting or Hunter, on average 24.5 scraps are obtained at a time, resulting in an hourly average of 490 scraps, so on average a bit over two hours are required for the normal daily limit. Up to 1,000 scraps can be earned per day, which can be doubled using a 1-day or 5-day limit extender.

Combining or replacing the above method with Crafting, Hunter, Treasure Trails or daily challenges may reduce the time required by up to 20%, from 3 minutes to 2 minutes and 24 seconds, saving up to 36 seconds every round.

The fabric scraps are rewarded at most every three minutes and are guaranteed from a skilling action. Thus, it is sufficient to gain a single drop of experience every three minutes to get the full benefits from gathering, Furthermore an increased number of scraps will be given if said drop is in Crafting or Hunter.

Scraps can be given to Wizard Deedit to unlock the following rewards:

Upon unlocking a new reward from Wizard Deedit, the following message appears in the chatbox, where x is replaced by the number of rewards unlocked so far:

You have unlocked x/6 of the rewards for the 'Sprites be gone' event.

While wearing the Devotion Sprite Costume earned from the event, shoo away 8 Devotion Sprites from the following list that are scattered across the land, granting a small XP lamp each.

The walking and running animation

The Heart balloon, unlockable from the event

Official artwork of the event

The broken unity machine from the pre-release 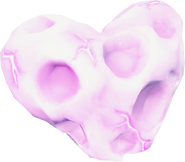 One of the many crashed devotion rocks

Artwork relating to the event

The Community button as it appeared during the second half of the event.

Click an image to enlarge
Retrieved from "https://runescape.fandom.com/wiki/2017_Valentine%27s_Day_event?oldid=21265123"
Community content is available under CC-BY-SA unless otherwise noted.