The upper floor of Harpoon Joe's House of 'Rum' on Mos Le'Harmless.

How novel - a pirate with a leg injury that does not involve a wooden peg. 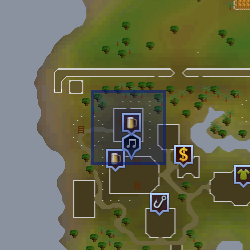 50 Ships Mufassah is a pirate currently living on Mos Le'Harmless, a large pirate port in the southern reaches of the Eastern Sea. He can be found upstairs in the northernmost bar. Bill Teach describes him as failing when it comes to piracy, although he seems to have spent many years as a pirate. He plays a small role in the Rocking Out quest, and will later give players an ex-parrot.

Mufassah earns his name because, over the course of the years, he has had a total of 50 ships. Each of these has been destroyed or taken. Nearly any loot he has ever obtained has been restolen, buried in an obvious location, or destroyed. He is also distinguishable by walking around on crutches, having recently broken a leg after losing his latest ship. Despite this, he is currently looking to get another ship and crew upstairs in Harpoon Joe's House of 'Rum', a disreputable bar on the island.

During Rocking Out, players must take Mufassah's only remaining treasure, the Idol of many heads. To take this, they must first gain his trust by joining his crew. Once the player agrees to join, he'll inadvertently point them towards the Dragontooth Shipwreck off the northeast coast of Dragontooth Island, where the idol sank along with one of his past ships, forcing the player to dive underwater to retrieve it.

After completing the quest, the player can visit him to claim a parrot cage from Bill, and then an ex-parrot from Mufassah which belongs to Achmed the Brutally Violent. Because the player refuses to take any other jobs on Mufassah's ship, they are given the task of keeping a dead parrot as a joke. The player can use the caged parrot on a black slab on Mos Le'Harmless to revive it as an ex-ex-parrot, a pet, which scares Mufassah when he sees it.

Retrieved from "https://runescape.fandom.com/wiki/50_Ships_Mufassah?oldid=24563496"
Community content is available under CC-BY-SA unless otherwise noted.