Start a Wiki
OS
For the quest that takes place here, see Haunted Mine.
[view] • [talk]

The Abandoned Mine, sometimes called the Mort Ridge mines,[1] is an old multi-level complex under Morytania that once was the site of an extensive mining operation. It has since been abandoned and partially flooded by the River Salve. The mine features prominently in the Haunted Mine quest.

The mine also contains the entrance to Tarn's Lair, which can be found through a passageway in the northern part of the mine's level 1. This is the location of The Lair of Tarn Razorlor miniquest, in which players fight Tarn Razorlor and gain the ability to enchant a salve amulet. The lair also has terror dogs, which are sometimes assigned as Slayer tasks.

Morytania had been under the rule of the Vampyres for some time. Lord Lowerniel Vergidiyad Drakan aided Zamorak in his rebellion against the god Zaros and was rewarded with Morytania as his land to rule, provided he could conquer its inhabitants. He quickly mastered Hallowvale (later called Meiyerditch), the land's chief city, during the God Wars, which gave him complete control over Morytania.

During the Fourth Age, the hordes of Morytania were engaged in a constant struggle with the people of Misthalin and Asgarnia. The Zamorakians, seeking to expand their empire to include Misthalin, launched assault after assault across the River Salve against that land. The Salve, a large river with many defensible cliffs, effectively separated Morytania from Misthalin. The only crossing point was at a small spit of land west of modern-day Canifis. The battles were endless, and the people of Misthalin began to lose hope when six of the Seven Priestly Warriors were killed at the site.

In a desperate attempt to end the wars, a number of priests invoked the powers of Saradomin to bless the River Salve, which would, it was hoped, prevent the unholy Morytanians from crossing. Soon, the Paterdomus Temple was built at the site of the battles, effectively ending the war between Morytania and the humans.

Years later, during the late Fourth Age, a large ore vein was discovered west of modern-day Burgh de Rott. The Drakan family used a massive number of enslaved humans gathered throughout Morytania to work the mine. The mine was dug deep and rich veins of ore including mithril and adamant were found. The mine became one of the largest in the known world at the time.

The miners, after digging far deeper beyond the limits of safety, discovered something hidden in the mine's depths. As soon as Lord Drakan was informed of this, he ordered the mine be shut down. Worse yet, all within the mine, slaves, vampyres, and crewmen alike, were slaughtered or trapped in the ensuing collapse. What was discovered in the mine remained a secret.

During the Haunted Mine quest, players venture into the now-haunted mine as they attempt to discover what the miners found, and why Lord Drakan feared it so.

The quest reveals that the holy River Salve had been seeping into the lowest reaches of the mine. Although most of the water was tainted by the land's twisted soil, some remained pure and retained Saradomin's blessing. This collected in the mine's lowest shaft, with purple crystals growing in it. These crystals absorbed the blessing and, when exposed to the unholy creatures of the land, could severely weaken or even kill them. Drakan thus had the mine destroyed to prevent the crystals from falling into the hands of Saradominists. To further protect the crystals, Drakan imprisoned Treus Dayth, one of his followers, on the lowest level. Even after Treus Dayth died, his tortured soul continued to serve as the mine's guardian.

A tour of the mine

The levels are numbered in the order the player encounters them in the Haunted Mine quest, with level 1 being the closest to the surface and level 6 being the deepest.

It should be noted that a player will need a light source and a tinderbox (light source gets extinguished as soon as you go down the stairs) if they wish to enter the part which contains the crystal mines.

Be aware that each level of the mine contains two or more separate zones. You cannot get directly from one zone to another when on that level! Instead, you may have to ascend or descend to other levels, or go outside, to get from zone to zone. A few zones are completely inaccessible.

This tour assumes the player has completed the Haunted Mine quest. For players playing that quest, see its article for the special things that must be done in the mine. 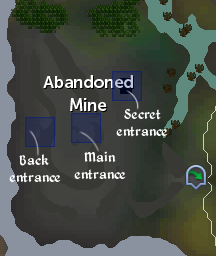 The mine can be approached from the Mort Myre Swamp to the north. Level 61 Vampyres infest this path. Follow the mine cart tracks to find the main entrance. Most mine carts can simply be walked around, although one near the entrance itself must be climbed over (clicked on). There are also two back entrances near the River Salve, where part of the mine cart tracks temporarily leave the mine. All three of these entrances go to level 1.

There is also a secret entrance to the mine. This goes to a room on level 2. However, both doors to this room are locked and require the Crystal mine key to be unlocked. The player acquires this key during the Haunted Mine quest.

For those who have aided Burgh de Rott in the quest In Aid of the Myreque, a new path opens to the east. Jumping over the low fence (no Agility level required) will bring the player near the Mine. Just run west a little and then choose your entrance. Note: Vampyres also plague this area.

If you need to move a glowing fungus across level 4 to ladder 10, use these points settings: 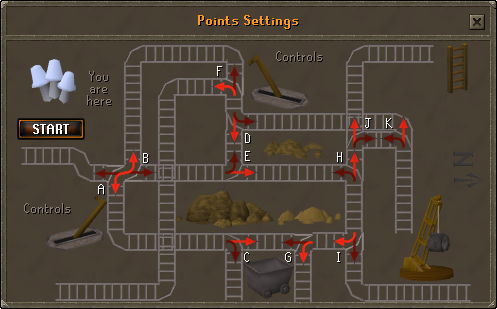 Players must have a glowing fungus in inventory to light this level. Nothing else, not even the Seers' headband or the Glow Worm perk, works as a light source here.

Getting around in the mine

This section is based on the map labels and provides a compact guide to getting to the more interesting areas of the mine.

To get to point P on level 4 from the surface (and move a glowing fungus by mine cart):

To get to point 10 on level 4 from point P (to get the glowing fungus after moving it):

To get to point bb on level 6 from point T on level 4 (to get crystal mine key):

To get to point hh on level 6 from point bb on level 6 (to get to crystal mine):

To get to point hh on level 6 from the surface (to get to crystal mine; already have crystal key):

To get to point K on level 2 from the surface (to mine level 2 ore veins):

Those that were killed in the mine were forced to remain even after death. These spirits now wander the mine, taking their revenge upon all who enter. Some of the abandoned mining equipment has also become possessed, potentially making anything a threat. Much more dangerous beasts await those that venture into Tarn's lair.

Also beware of mining equipment such as:

Despite years of heavy use, the mine is still rich in ore. Although many of the veins are too deep to reasonably reach, some are accessible throughout the upper levels of the mine.

The nearest bank can be found to the east in Burgh De Rott, although it is not open until it is repaired during the quest, In Aid of the Myreque. Numerous aggressive Vampyres plague the land between the mine and Burgh de Rott, but players can greatly lessen the threat by wearing good armour, running, and turning auto-retaliate off. A furnace is also in the city, which is useful for smelting the ore.

There is also a bank in Tarn's Lair, although the path to it is guarded by aggressive Zombies and Skeletons as well as numerous traps. A fee of 100 coins is required for each use of this bank.

The ore veins on level 2, with coal, mithril, and adamantite, are quite practical to mine, although few players seem to realise this. After the Haunted Mine quest, players will have the Crystal mine key, which can be used to unlock the doors to the veins on level 2. Also after the quest, players can use the secret entrance, which is right next to the level 2 veins. This makes the round trip between the Burgh de Rott bank and the level 2 veins fairly fast, equivalent in time to other high-value mines like the Mining Guild and the mine on Jatizso.

How to mine with the Possesed Pickaxes

Level 50 possessed pickaxes will attack anyone. A way to mine without the pickaxes constantly attacking is to run to the mining spot, animate the pickaxes, then run away until the pickaxes no longer target you, then wait for the yellow dots to disappear. The pickaxes will then be on the ground and unanimated. They will not reanimate unless clicked on, allowing the ores to be mined. Leaving and returning will not cause the pickaxes to reanimate.

All ore is found in ore veins in the mine's walls, rather than in ore rocks like in many other mines. Some veins are in areas that cannot be reached and others are blocked by debris or abandoned equipment. Many veins nonetheless are accessible, and these provide:

There are two quests involved with the Mort Ridge Mine.

Retrieved from "https://runescape.fandom.com/wiki/Abandoned_Mine?oldid=21573481"
Community content is available under CC-BY-SA unless otherwise noted.