She's got the weight of the abbey on her shoulders. 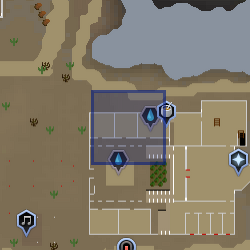 Abbess Benita is the leader of the Abbey of St. Elspeth Citharede. She runs the abbey with a lenient hand, allowing the sisters certain freedoms such as composing.[1] She is also willing to give second chances.[2] She relied upon a fellow nun, Sister Anna, to help her with the task, taking care of the paperwork while Sister Anna screened the applicants.[3][4] She had been planning on retiring in a year, allowing Sister Anna to take over as abbess.[3][5] Prior to joining the abbey, she lived a peaceful life in Varrock. She has also written two religious texts, A Commentary on the Book of Saradomin and The Godwars as Allegory of the Spiritual Life, which can be found in the abbey's bookshelves.

She discovered a body in Sister Anna's cell and mistakenly assumed that it was Anna, when in reality it was the applicant Isabella. She prayed to Saradomin and commanded Sister Catherina to wait for an adventurer.[6] She tasked them with discovering the identity of the murderer, requesting they keep the nature of their investigation a secret, for fear of alarming the nuns. Despite her precautions, she was unable to save Sister Elena from being killed. She asked the adventurer to bring Sister Catherina into the safety of the abbey walls, but could only watch helplessly as the Killer revealed themselves and killed the novice. She proceeded to take the adventurer and Valerio, a troubadour who had set up camp outside the abbey, into her confidence, stating they were the only two she was certain were not the killer. The three of them concocted a plan to catch the killer, rejecting ideas of using gold or ancient relics as bait, as they abbey was ill-funded and the killer was seemingly uninterested in holy artefacts. They eventually decided to claim one of Valerio's troupe was to join the abbey and hid a dummy applicant in the cellar. The killer struck again and the adventurer pursued, eventually leading to a confrontation in the clock tower. The killer was revealed to be Sister Anna, driven mad, which Abbess Benita initially refused to believe.

After accepting that her trusted friend was a killer, Abbess Benita decided to step down, only remaining in the role until a new replacement could be found.[7] When news of the murders got out, there was a drop in applications, members possibly left,[8] and she is fearful that the order may soon die out.[9][7]

Retrieved from "https://runescape.fandom.com/wiki/Abbess_Benita?oldid=24564588"
Community content is available under CC-BY-SA unless otherwise noted.
... more about "Abbess Benita"
RDF feed
Is members only
No +
Store location
Abbey of St. Elspeth Citharede +