"Abbey" redirects here. For the music track, see The Abbey.

The Abbey of St. Elspeth Citharede is a large abbey in the desert where the followers of Saint Elspeth live. The organisation and abbey were founded in 99 or 100 of the Fifth Age.[1] It is located east of Al Kharid, past the desert strykewyrms. A Saradominist abbey was founded there in her memory,[1] and the Sisters of Saint Elspeth devote their time to music and prayer within its walls. The abbey has sand-blasted walls, and a gate to keep out the desert strykewyrms, which are found immediately to the west, as well as bandits.

It is the location where St. Elspeth's remains were found. The Ripper's remains are also found here, though the abbey's inhabitants are seemingly unaware of it. Unlike Elspeth, The Ripper survived and is lingering beneath the abbey, having corrupted several miners and turned them into a pack of ripper demons.

The abbey plays a large part in the quest One Piercing Note, where a murder takes place within its walls and, not long after, a secular troubadour sets up outside the abbey.

In the basement, accessed through the north-east descending staircase, players can retrieve the Holy Cithara and the Citharede robes. Illuminated god books are created within the abbey.

Members of the order

The central courtyard of the Abbey.

A statue of Saint Elspeth.

The abbey's roof and entrance to the oratory.

The path to the strykewyrms and the abbey.
Click an image to enlarge 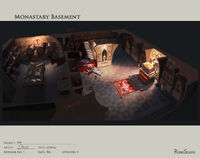 Concept art of the Abbey.
Click an image to enlarge

Retrieved from "https://runescape.fandom.com/wiki/Abbey_of_St._Elspeth_Citharede?oldid=22943007"
Community content is available under CC-BY-SA unless otherwise noted.