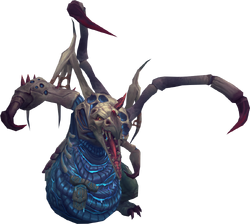 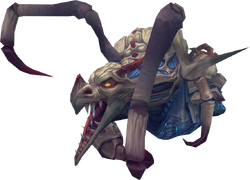 The Abomination is the mutated form of the dragonkin Tarshak, and the final boss of the Hero's Welcome quest. It can be found in Tarshak's sanctum in the Brimhaven Dungeon.

The second phase of the Abomination may be fought again after the quest by using the "refight" option on the bane ore rockfall. The abomination cape may be received in a post-quest refight.

During phase 1 of the quest fight, the Abomination has 198,000 life points, although it cannot be attacked. Instead, the player must chip away at the pillars and destroy them to collapse a bunch of bane ore in the ceiling. After the collapse, phase 2 of the fight begins, but due to bane ore collapsing on the Abomination, its health will be reduced to 66,000.

The fire attack and falling rocks will deal damage to the Abomination as well, but cannot kill it when its health is low.

All of its attacks are unaffected by any number of armour rating, so offensive armour should be used instead of tank armour. Protect from Melee or Deflect Melee will still halve the damage output, however.

The water pools in the northeast and southwest corners will prevent any damage from the area-of-effect fire damage, although it will not affect the initial impact.

The Abomination has very high defence, even so that tier 90 weapons will often miss against it. Dragonbane ammo does not seem to deal extra damage and accuracy towards it. Using dominion mines can be very effective, each one hitting 10,000, and players can use up to two mines within a minute.

The abomination drops 2 items from its main drop table.

Concept art of the Abomination.
Click an image to enlarge
Retrieved from "https://runescape.fandom.com/wiki/Abomination?oldid=23378825"
Community content is available under CC-BY-SA unless otherwise noted.