Start a Wiki
OS
This article is about the Runecrafting method. For other uses, see Abyss (disambiguation).

The Abyss is a "glue" plane that sits between realms and holds them together. Inside of this dimension, is Hostilius, a Chthonian demon that was defeated by Zamorak and the Avernic during the demonic rebellion, was banished and imprisoned here. It is within his body, in this region of the abyss that, with exception of the Astral and Ourania Runecrafting Altars, provides access to all the existing altars without the need for a talisman. Hostilius' internal body consists of two rings; a dangerous outer ring in a multiway combat zone and a safe inner ring with rifts leading to the Runecrafting altars. In appearance, it seems to be oddly organic, with eyes, boils, and strange-looking tendrils.

In addition to the abyssal monsters inhabiting it, using this method is also dangerous because players who enter will have their Prayer points drained to 0.

Perhaps the most dangerous aspect is the fact that players have to travel through part of the low-level Wilderness to reach the Mage of Zamorak, who teleports the player inside.

Players who enter runecrafting altars through the Abyss receive 250% experience when crafting runes. This can be raised to 350% by wearing a demonic skull, which can be bought from the mage of Zamorak for 550,000 coins. The skull is not without risk: when you wear it, a demon's head will appear over you, and players of any combat level will be able to attack you in the Wilderness. Should you die to another player, it will be dropped as 500,000 coins for the killer to loot. There is no requirement to have talismans, tiaras or talisman staffs while in the abyss.

The interior of the area is roughly circular, with an 'inner' and 'outer' ring. After the player is teleported into the outer ring, they will have to find a way through to the inner ring where the rifts leading to the runecrafting altars are located.

The outer ring contains a large number of Abyssal monsters:

These monsters can hit over 275 (with the exception of the leeches, which hit a maximum of 208), although they often miss if the player has a decent defence level (65+) and wears adequate armour such as Dragonhide, or armour from the 'strategy' section. However, the abyssal monsters should still not be underestimated as, due to their large numbers, a player may take several hits per second. Failed or not, no damage is taken from these monsters during an attempt to pass through to the inner ring. Minimising time between attempts can increase the chances of survival.

Access to the inner ring is gained by utilising different skills to bypass several obstacles:

These obstacles have randomly generated locations upon a player's arrival in the abyss and can be in different locations for different players at the same time. Passing them gives 25 xp in the required skill. The higher the level of the player in the corresponding skill, the higher the chances of passing the obstacle (the chances of passing are approximately skill level ÷ 99). 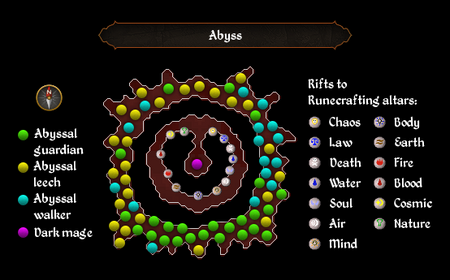 There are no monsters in the inner ring of the Abyss. There are rifts leading to every Runecrafting altar (except the Astral Altar and Ourania Runecrafting Altar) there, which makes the Abyss useful for crafting a lot of different types of runes very quickly. Talismans, tiaras or staves are not needed to access the altars via the rifts. The following restrictions still apply:

There is a dark mage standing at the centre of the inner ring (yellow spot on the minimap), maintaining the rift so the ZMI can use the Abyss to craft runes. He will repair players' Runecrafting pouches for free.

Pouches come in five sizes - small, medium, large, giant, and massive. The small pouch will be obtained from the Zamorak Mage upon completion of the Abyss mini-quest; players may retrieve the small pouch from him later on if they drop or lose it. All the pouches except for massive are dropped by the creatures in the Abyss and the alternate abyss as well. Since the release of the Runecrafting Guild, players can now also obtain some pouches from the Wizard Korvak. He can replace lost medium pouches for free and will repair any others for a fee; it is thus suggested that players instead visit the Dark Mage in the centre of the abyss to repair your pouches. Korvak charges 9,000 coins & 12,000 coins for large and giant pouches respectively, and repairs medium pouches for free. He also sells large pouches for 25,000 coins & giant pouches for 50,000 coins. No matter where you choose to obtain your pouches, you may only get one of each size. The pouches are also untradeable. If you try to pick up another pouch, the message, "You do not need another <size> pouch." will appear. In addition, all pouches will automatically be destroyed upon death (they have a white outline in the 'Items kept on death' interface). This creates a risk, especially when under attack by a player in the Wilderness.

When a pouch degrades, it will darken in colour; the player will receive a message in their chatbox alerting them to the fact. Pouches can be repaired by speaking to the Dark Mage in the centre of the Abyss (or with the Lunar spell NPC Contact). He will repair pouches whether they have visibly degraded or not. It is possible to contact the Dark Mage every 11th trip to repair pouches so that the pouches may always be used at full capacity. However, it may be difficult to remember to keep track of which trip is the 11th trip, so it is common for players to just go to the Dark Mage after the Giant pouch has visibly degraded, crafting 3 fewer essence on that trip.

Pouches are also repaired even when they are stored in a bank, so they don't have to be carried in the inventory when talking to the Dark Mage. Alternatively, for players who have access to the Lunar spellbook you can repair your pouches by using the Contact NPC spell.

An exception to this is the Massive pouch, which after every 42 uses will crumble into dust. It is also possible to own more than one, but only one may be filled at a time and there is no way of repairing it.

Any pouch that gets dropped may be picked up by the player who dropped it (within three minutes), however, all the essence that was contained within the dropped pouch will be gone.

Using the Abyss as a method of transportation

Because the altars are located throughout the world, it is possible to use the Abyss as a method of teleportation. Some useful (and free) teleports include:

To use a teleport, simply enter the Abyss, find and enter the altar, then leave via the portal. No tiaras or talismans are necessary when entering the portals to go to the various altars via the abyss.

Training Melee, magic, and ranged combat skills in the Abyss is one of the higher exp/hour AFK training methods in Runescape granting 500k-600k combat exp/hour.

Retrieved from "https://runescape.fandom.com/wiki/Abyss?oldid=24923549"
Community content is available under CC-BY-SA unless otherwise noted.