View source
This article is about the race. For other uses, see Abyss (disambiguation).

The Abyssal race are creatures that can be found in locations including the Abyss and Abyssal Area. Some abyssal creatures can be summoned through the use of the summoning skill. 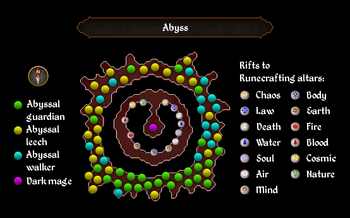 There are three types of Abyssal creatures that dwell inside the Abyss:

It is unknown how long they have lived there, but they have most likely been in the Abyss since before its discovery by the Z.M.I., due to the Abyssal book mentioning that "certain creatures of the abyss contain unnecessary surplus organs that may be harvested to provide carrying pouches for various magically-unstable objects." 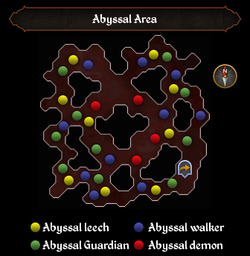 The book also mentions that the barriers of the Abyss have weakened, allowing some creatures to leak into Gielinor (possibly creating the situation of abyssal demons in the Slayer Tower). The Z.M.I. seems to have plans to use this to their advantage.

Since the update of Summoning, there are three abyssal summoning familiars:

These three creatures are directly linked to the Abyss, the Parasite offering advantages when entering.