View source
watch 01:54
Arcane: League of Legends - The Loop
Do you like this video?
Play Sound
OS

A player logging in

An Account is the means by which a player is identified in RuneScape. It holds all the information on the player's in-game activities, including their skills and achievements, all the items they possess, and the quests they have done. It also makes the player accountable for anything they have said via the game's chat interface, specifically including any breaches of the Rules of RuneScape.

A player's account is similar to, but separate from, his or her character. The character is represented by an avatar that exists in-game. The avatar is customizable to allow the player to feel individual. Jagex has stated that accounts and characters are generally kept separate[source needed], meaning that black marks received on an account (such as in the RuneScape Forums) do not reflect on a player's character (with the exception of a ban or mute).

Players may receive messages from Jagex via their Message Centre when they log into the game. This is the only means by which Jagex contacts players individually, as they never use email. Players also need to log into their account to use certain functions on the RuneScape website, including posting on the RuneScape Forums, (for those that have not attained 350 overall total level) vote in official polls, and accessing the player moderator centre (if the player has player moderator status).

As of 24 January 2010, players are required at sign-up to give Jagex their email address. However, they will not contact anyone through email as previously stated. You can check on or off if you want to receive newsletters and such via email.

A player must create an account in order to play the game, requiring a username and a password. The account starts out as free-to-play by default, but the player can choose to pay a monthly fee to gain extra pay-to-play content and functionality or stay a free-to-play.

A player can create more than one account, and can interchange between playing them with no limits. It used to be forbidden to log into more than one of their accounts at the same time, but this was changed in May 2014 , explicitly allowing trade and other interaction between alternate accounts "as long as it doesn't involve rule breaking or gameplay exploitation."[1] One may not allow anyone else to use any of their accounts at any time.[2] Jagex also prohibits the sale of accounts. Jagex keeps a strict surveillance on players attempting to sell accounts, and an offender is liable to incur severe penalties, such as being banned, if they should attempt to either buy or sell an account.

General tips for keeping your account and self secure:

Accounts owned by the same person are allowed to interact with each other so long as they are not manipulating any game mechanics. For example, trading money from one account to another is acceptable, but logging into another account and killing it to upgrade a Duellist's cap is not.

A Throwaway account is an alternate account that has been created to carry out a certain task with the owner having no intention of developing the account. They are sometimes used to accomplish something controversial or malicious, such as griefing or disrupting the community. They can also be used to experience or re-experience low level content and quests. 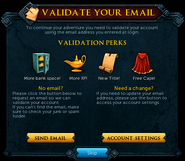 The message that appears when you log into an account that was made before 24 January 2010 and haven't validated your email yet.

The message that occasionally appears when you log into an account that was made before 24 January 2010 and haven't validated your email yet.

The "Thank You" message that appeared for all players upon the 200 millionth account's creation. 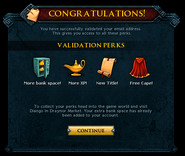