Just outside the Heroes' Guild 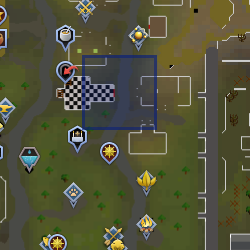 Achietties is the guard and chancellor of the Heroes' Guild, between Burthorpe and Taverley, standing outside the guild's front door. She is the starting and finishing point of the Heroes' Quest. After the quest is complete, she allows players to enter the guild. She wears Steel armour and a grey headband.

Little is known about her past, but according to Xenia, Achietties' parents vanished while venturing the Eastern Lands among several others and that Xenia has been trying to convince her into becoming an adventurer.

Currently, Achietties has no other uses besides talking and giving the player information about the Heroes' Quest, including the requirements.

Achiettes explains that the doors to the Heroes Guild are currently locked.

Retrieved from "https://runescape.fandom.com/wiki/Achietties?oldid=24562883"
Community content is available under CC-BY-SA unless otherwise noted.