Dropping this banner will destroy it, but you can speak to Diango in Draynor Village for a replacement. 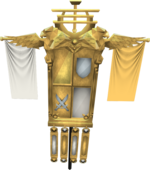 The Achievement banner is an item available for purchase from Solomon's General Store for 1,000 RuneCoins, or 900 with the members discount. It can be planted on the ground, similar to a Dominion marker, which, when read, displays the player's achievements. The banner will stay in place for 5 minutes before disappearing. The banner remains in your inventory after placing it, similar to the Clan vexillum. The banner remains placed down even if you destroy it, move very far away, log out, or hop to a different world.

The messages that the banner speaks are in this order: the player’s name, motto, total quest points, combat level, and total experience. The player can customise the banner’s colour and motto.

The achievement banner cannot be placed in the following areas: 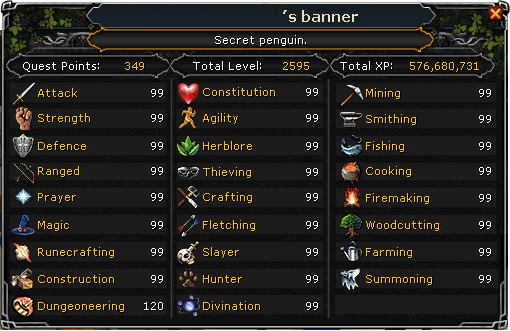 Retrieved from "https://runescape.fandom.com/wiki/Achievement_banner?oldid=20923895"
Community content is available under CC-BY-SA unless otherwise noted.