It looks like he decided to have a change of scene. 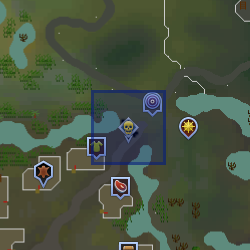 Achtryn is a demon who temporarily replaces the Slayer Master Mazchna while he is busy during the quest While Guthix Sleeps. Like Mazchna, Achtryn is a demon, though his face and proportions look decidedly human. He claims to be from the abyssal regions, where, it is said, demons on Gielinor originate from. After the quest is over, Mazchna returns to his post near Canifis, and also reappears on the NPC Contact spell in the Lunar Spellbook, and Achtryn is not seen again.

He claims that his lair in the abyssal regions is a fine place of residence, but it is good to see the sights, to meet mortals and generally socialise.

Many slayer monsters have numerous variants of the monster assigned. Please check the monster's page for more specific information about the different variants.

At each ring, the player must contact Achtryn using an Enchanted gem. If the player does not have a gem in inventory when the task is assigned, Achtryn will give the player a gem for free (even if the player has an enchanted gem in the bank).

The three monsters you have to fight are a Ravenous snail (level 33) at ring BKR, a Ravenous vampyre (level 72) at ring ALQ, and a Ravenous ghoul (level 42) at ring CKS. The fairy rings can be done in any order. The reward for the challenge is 2,000 Slayer experience and 3 slayer points.

For Achtryn, assuming all possible assignments are available,