Adamant dragons are metal dragons found within the Dragonkin Lair and the Adamant dragon dungeon inside Brimhaven Dungeon. They drop pages for Forcae's journal, the journal of the Dragonkin scientist who created them, along with being the only dragons besides mithril dragons to drop dragon full helms.

The dragons were first announced in the June 2015 BTS. They won the first RuneLabs poll, alongside rune dragons.

Adamant dragon dungeon inside Brimhaven Dungeon, accessible via a set of stairs in a room between the moss, fire giants and black demons. The dungeon contains multiple sections; the largest is accessible by anyone, but the smaller rooms are blocked by magical barriers that require 70, 80, or 90 Slayer to pass.

Dragonkin Lair near Kuradal - The dragons are featured in Hero's Welcome where one of them needs to be defeated, and can be found in the Dragonkin Lair post-quest. The one fought during the quest does not drop anything.

Adamant dragons can use all three attack styles, as well as dragonfire. Super antifires are highly recommended, with some form of dragonfire protection being needed. While in melee range it will not use its Ranged attack, while outside of melee range it will be unable to use melee. For this reason, it is suggested that:

On a side note, they will use Magic attacks in melee range.

Use of magic notepaper, metallic dragon trinkets and/or a pack yak with winter storage scrolls is highly recommended due to the large number of unstackable commodities dropped by adamant dragons, namely adamant bars and hardened dragon bones.

The stairway into the Dragonkin laboratory

The lobby of the laboratory 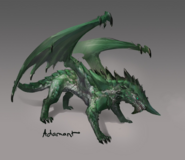