Start a Wiki
OS
This article is about the platelegs version. For the plateskirt version, see Adamant gold-trimmed armour set (sk).

An adamant gold-trimmed armour set (lg) is a variant of the Adamant armour set (lg). None of the pieces can be made by a player. The stat bonuses of this set are identical to an ordinary Adamant armour set. Only Members can find pieces of it, but non-members can purchase it and wield it. All of the components are possible rewards from completing level 2 Treasure Trails. 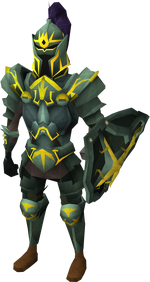 Retrieved from "https://runescape.fandom.com/wiki/Adamant_gold-trimmed_armour_set_(lg)?oldid=24536949"
Community content is available under CC-BY-SA unless otherwise noted.