View source
watch 02:52
Roblox: DeepWoken - The Loop
Do you like this video?
Play Sound
OS

He probably hasn't smiled since the Third Age. 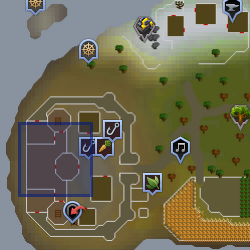 Advisor Ghrim is the advisor to King Vargas. He is involved in Throne of Miscellania and Royal Trouble. He helps players to manage the kingdom of Miscellania. He is located on the first floor of the castle in Miscellania. If players ask for advice about managing their kingdom, he will give them a book on the subject, titled Managing Thine Kingdom for Noobes.

Players may also deposit/withdraw money into/from the kingdom's coffers, retrieve the resources their subjects have gathered, and change how many subjects are working on a particular task. Players can right click him and choose 'Manage-Kingdom' or choose 'Collect' to collect their resources. With the NPC Contact spell, players can communicate with Advisor Ghrim from anywhere and can ask about their approval rating. However, they cannot deposit or withdraw money or receive the book on kingdom management.

He will also give players the rewards for the hard Fremennik Province Tasks. After completing them, he will also purchase unnoted flat packs for 10% of the material cost needed to make them. This transaction is independent of the Kingdom Management activity.