No (Yes, if completed River of Blood)

Roald's advisor - he seems to be a follower of Saradomin. 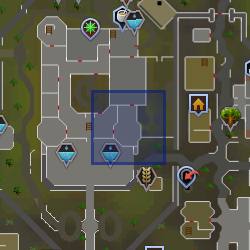 Master Aeonisig Raispher is a Saradominist priest and advisor to King Roald III. He is located on the ground floor of Varrock Palace in King Roald's throne room. He plays a small role in Darkness of Hallowvale, where he dissuades King Roald from engaging in direct conflict with the Vampyres, referencing the Edicts of Guthix and their demand for balance. He appears to be an extremist Saradominist, difficult to bargain with, and even uptight. Despite being a cleric appointed as the King's spiritual advisor by the Church, Aeonisig is also a skilled combatant, having fought in the Wilderness. During the Zamorakian Insurrection of 165, he was the leader of the Inquisition of Saradomin, where he and his men arrested and/or killed anybody believed to be Zamorakian.

Although Varrock has free religion in theory, there has been much persecution of other religions in the city recently, particularly of worshippers of Zamorak. It is likely that he influenced this, as he implies that he does not like other religions, when spoken to during the quest.

During The Lord of Vampyrium, he attempts once more to dissuade King Roald from directly intervening in Morytania, again referencing the Edicts of Guthix, although when the player mentions the werewolves crossing the Salve and the Morytanian splinter group as proof that the Edicts are already being broken by everyone else, King Roald demands to know why Aeonisig had not told him about them, to which Aeonisig responds that he did not believe it worth the King's time as it was valuable. Claiming that such things are not for him to decide, King Roald orders him to send reinforcements to Paterdomus at once, but when asked Aeonisig says he hasn't done it yet.

During Defender of Varrock, he is one of the possible descendents of the Elders of Varrock.

During River of Blood, King Roald sends him to Paterdomus with a scout unit led by Captain Rovin, as punishment for Aeonisig's inaction. After a vampyre attack, he points out to the player what needs to be done before the Varrockian army is ready to defend Paterdomus. After the first assault, Aeonisig is quick to point out that turning any vampyre that crosses the Salve feral is not going to help the situation. During Vanescula's second assault Aeonisig attempts to seize an opportunity for the player, Ivan Strom, Safalaan and Efaritay to attack her, until he's told to step down as Vanescula and Safalaan broker a truce. After the quest he can be found atop Castle Drakan serving as an ambassador for Varrock, apparently as further punishment from King Roald.

During Legacy of Blood, his fanaticism about Saradomin is shown as he states that Saradomin created the Edicts of Guthix. He is also put in charge of the Inquisition of Saradomin following Zamorakian uprisings, and given near unlimited powers to prosecute non Saradomonists. Within the year though the Inquisition is disbanded and he goes back to being an advisor.

Retrieved from "https://runescape.fandom.com/wiki/Aeonisig_Raispher?oldid=25381542"
Community content is available under CC-BY-SA unless otherwise noted.