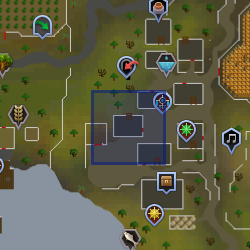 Aggie is a young witch notable for selling potions and dyes. She is located in Draynor Village, in the only house with a cauldron. Her house also contains cheese and tomato spawns, useful in making pizzas using the Cooking skill. According to Brian in One Small Favour, Aggie is a 'family friend' and 'a pillar of the local community', and Brian, knowing of her residence in Draynor Village, asks you to ask her if she will be a 'character witness' for his friend, who is to be jailed for what he considers a minor crime. Aggie promises to serve as such a witness in return for your finding her apprentice, 'Jimmy the Chisel', who had gone to Lumbridge for supplies; Aggie also knows Ned and, from him, has heard of the chaos and monsters in Lumbridge.

According to Maggie, Aggie "is great at harnessing magic from the air around her" and in Swept Away, Aggie says that "Maggie's an old friend and we go back quite a way."

Located in her house is Aggie's broom which is used during the Rebuilding Edgeville miniquest. It needs to be charged with 100 Water runes in order to function.

Cheese was one of the first spells she learnt. The tomato was another spell experiment that went slightly wrong. She was actually trying to summon a lesser demon.

She doesn't like being called ugly and she says she look good for a witch and takes as an example as better than Hetty. She says her cheese is no ordinary cheese, it's "Aggie's Self-Replenishing Cheese spell version 12".

She says to be careful with tomatoes, because they do sometimes bite. She says they can protect her from "nuisance" Evil Bob. He is always sneaking up behind Aggie. She says she should turn him into a rat and that'll teach him.

Aggie provides primary colours of dye for 5 coins plus ingredients.

Note: If the player selects the insulting chat option when talking to her she will charge 20 coins or an item such as a pot of flour. For blue dye, players may buy 2 woad leaves from Wyson the gardener for an additional 20 coins, or grow their own if they are a member.

Aggie also advises the player on how to make black and white dyes during the Land of the Goblins quest.