Akrisae the Doomed is a member of the Barrows brothers accessible after completion of Ritual of the Mahjarrat. He is the wight of Akrisae Kolluym, who was turned by Sliske during Ritual of the Mahjarrat, jumping in the way of Sliske's spell to save the player. Akrisae shares his crypt with Verac the Defiled in the north-west of the Barrows area, only accessible after completing the quest. Both tombs are in separate rooms of the crypt. Akrisae attacks with Magic using his war mace. He is stronger than the brothers as he also uses protection prayers in a similar manner to that of tormented demons.

Akrisae's set effect, Akrisae's Doom, gives him the chance to drain the player's prayer in a similar manner to that of a player wearing an entire set of Guthan the Infested's equipment. When a player not using prayer attacks him and the effect activates, he will say "Ahh, more prayers.". Akrisae attacks using magic and is very accurate, so Protect from Magic/Deflect Magic is advised. Akrisae only uses his magic attack within melee range, so using a stunning ability such as Binding Shot or Impact is very effective in reducing damage. Akrisae also uses protection prayers in accordance to what the player is using - after being dealt with 1500 damage in one combat style, he will immediately pray towards that style, requiring the player to use another combat style to defeat him. Players can hit over the damage cap if they hit fast enough, such as shooting a bolt from a crossbow and then using a quick ability to deal high amounts of damage before he can switch prayers. The ability Smash can temporarily disable his prayers.

Akrisae is weak to Bolts, therefore a strong ranged weapon such as dual ascension crossbows or chaotic crossbows, or a royal crossbow is recommended, alongside another strong weapon such as a chaotic maul or a chaotic staff casting Fire Surge to counter his prayer switching. Abilities such as shadow tendrils, Incendiary shot, Meteor Strike, Overpower and Omnipower are useful to deal large amounts of damage before he switches prayers. If in combat with him long enough he will run out of prayer in a similar fashion to a player.

Akrisae does not drop his main rewards directly; instead, his equipment is added as possible rewards from the Barrows chest. See Barrows#Rewards for more information. However, Akrisae can directly drop the following items. 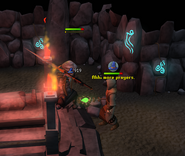 Akrisae wearing a Santa hat during Christmas.
Click an image to enlarge

Retrieved from "https://runescape.fandom.com/wiki/Akrisae_the_Doomed?oldid=24926052"
Community content is available under CC-BY-SA unless otherwise noted.