Start a Wiki
Not to be confused with Haskell. 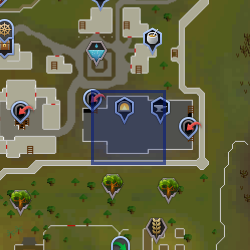 Aksel is a dwarf who can be found near the entrance to the Artisans Workshop. He built the furnace that dominates the ground floor of the workshop, a labour that took four and a half years, carving the rock himself. He says that he does little smithing now, leaving that to the other dwarves and to the humans that visit.

He will also occasionally appear to a player in the eastern portion of the ground floor of the workshop or the track making area in the basement of the workshop. If a player speaks to him, he will give that player permission to make a bronze ceremonial sword "for the wife of an important client." This is the only time that free players can make ceremonial swords. Abel or Egil will assist the player with the ceremonial sword, accepting the permission from Aksel and providing the metal to smith, but any other time that a free player speaks with them they say only "I only work with dwarves and more... worldly smiths."