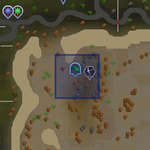 The Al Kharid mining site resource dungeon is a resource dungeon located in the Al Kharid mining site. You need to be a member and have a Dungeoneering level of 75 to enter. This is one of only two places that don't require a quest to mine gem rocks, the other being the Kal'gerion dungeon. Players will be granted 11,400 Dungeoneering experience upon first entrance to the dungeon.

Inside there are 7 gem rocks, 9 silver rocks, 11 gold rocks, and 5 impling spawns. It is a good place to catch low-level implings because the dungeon is small, preventing the implings from gliding around too much.

It takes roughly a minute for implings to respawn having caught them all. At most, 5 implings are in the cave at any given time.

All the gold rocks are on the west side, the gem rocks on the south side, the silver rocks spread around the north-eastern corner. The dungeon is a mere 27 squares across, making it very easy to navigate. A gem bag can be useful when mining the gem rocks.

Community content is available under CC-BY-SA unless otherwise noted.