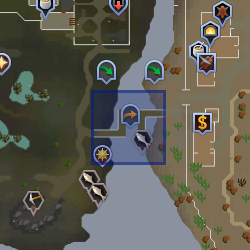 The port was originally only attached to Al Kharid, but an update in March 2011 extended it into a bridge between Al Kharid and Lumbridge Swamp.

As of yet, it seems that it was created solely for the use of the Fremenniks in Daemonheim. They chose this location to gather adventurers most likely because it isn't swarming with "outlanders" like Port Sarim, and is easily accessed by any willing to venture into Daemonheim. Strangely enough, there are no boats in the Fremennik Province offering to take you to Daemonheim.

Logistically, it was likely created so it would be easier for players to find and start Dungeoneering, which would be harder if it was mixed in with other ships in an area such as with Port Sarim.

Retrieved from "https://runescape.fandom.com/wiki/Al_Kharid_port?oldid=24925780"
Community content is available under CC-BY-SA unless otherwise noted.