He's the leader of the Bedabin tribe. 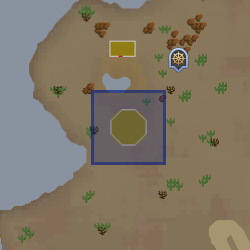 Al Shabim is the enigmatic leader of the Bedabin Nomads, a tribe of wandering nomadic people who settle down in different areas when they have exhausted the natural resources around their current camp. Shabim can be found in the larger of their two tents in their camp, south of the oasis. He is involved with The Tourist Trap quest, in which the players must make a bargain with him to obtain a Tenti pineapple, which are prized by many people in the desert for their succulency. For the pineapple, Al Shabim asks you to steal weapon plans from the Desert Mining Camp, which turn out to be plans to make a deadly throwing dart. He asks you to make a prototype and gives you permission to use the anvils in the north tent of their camp, after which he will give you the pineapple needed for the quest.

Retrieved from "https://runescape.fandom.com/wiki/Al_Shabim?oldid=24925667"
Community content is available under CC-BY-SA unless otherwise noted.