Start a Wiki
OS
"Al the Camel" redirects here. For the camel with a similar name, see Ali the Camel.

A camel who has the soul of a poet. 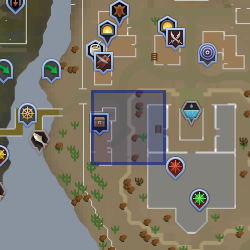 Al the Camel is a camel that tends to wander around Al Kharid Bank.

Players can talk to it while wearing a Camulet. You can obtain Ugthanki dung while not doing The Feud. Talk to him outside of the Al Kharid bank by having the Camulet equipped. Eventually, after talking for a while, Ugthanki dung will appear on the ground. Use a bucket on the dung to place the dung in your inventory.

He is non attackable.

If you right click and choose to talk to it, a window pops up in your box. Your character says, "If I go near it, it will probably bite my hand off". After you click to continue, your box text will show: The camel spits at you, and you jump back hurriedly.

Your character may also say, "I wonder if that camel has fleas...", or "Mmm looks like that camel would make a nice kebab." Sometimes it will show: The camel tries to stamp on your foot, but you pull it back quickly or it may show The camel turns its head and glares at you.

Your characters text and the box text varies between these phrases.

If your character is wearing a Camulet, Al the Camel will confess that he is in love with Elly the Camel, and he will offer to recite a poem. His two poems are titled "Shall I compare thee to a desert's day" and "This Is Just To Say," parodies of William Shakespeare and William Carlos Williams respectively.


Retrieved from "https://runescape.fandom.com/wiki/Al_the_Camel?oldid=24925661"
Community content is available under CC-BY-SA unless otherwise noted.