Start a Wiki
OS
Not to be confused with Alan, Allan, or Elen. 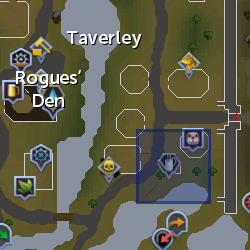 Alain is a druid gardener in Taverley. He looks over the local tree patch, and accepts a payment to look after the planted tree. If players ask, he can chop down trees for those unwilling to chop down the trees themselves. To do this, he requests a payment of 200 coins.

In addition, Alain plays a role in the Garden of Tranquility quest. As he is a member of G.A.G., the Group of Advanced Gardeners, he can be one of the gardeners talked to in the A Fairy Tale Part I quest.

Alain also sells basic farming tools, which can be accessed by talking to him and asking Can you sell me something? It is not an actual shop and it has no set stock; each item has to be bought individually through the dialogue.

Alain explains what the patch next to him is.
Retrieved from "https://runescape.fandom.com/wiki/Alain?oldid=24925540"
Community content is available under CC-BY-SA unless otherwise noted.