Yes
Yes - Forgettable Tale of a Drunken Dwarf
No

A pot filled with ale yeast. 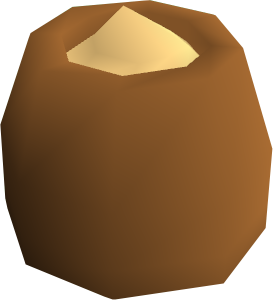 Ale yeast is an essential ingredient for brewing ales as part of the Cooking skill. Yeast is the final ingredient that must be added to a vat, and begins the fermenting process. This will usually take one or two days.

Players can purchase ale yeast from one of two brewing assistants found in the breweries, namely Blandebir in the dwarven city of Keldagrim (for 25 coins) or Metarialus in the ghost town of Port Phasmatys (who charges 5 ecto-tokens).

Players must also have an empty pot in their inventory to put the yeast in. In Keldagrim there is a pot respawn in the brewery, and in Port Phasmatys the general store stocks an infinite supply of them.

Retrieved from "https://runescape.fandom.com/wiki/Ale_yeast?oldid=844487"
Community content is available under CC-BY-SA unless otherwise noted.