Ali your ally from the alley. 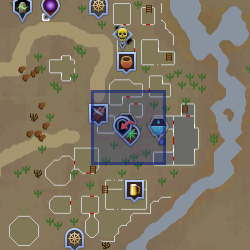 Ali Cat is a local un-owned cat found in Pollnivneach who can be spoken to with the aid of the Amulet of Catspeak, one of the many magical translation trinkets of RuneScape. Ali Cat is involved in the Smoking Kills quest, in which he appears when the player attempts to descend into the Pollnivneach Slayer Dungeon through the well in the centre of the town, telling them that they can't go down there, as there is smoke and Banshees, which, without the right protection (a Face mask and Earmuffs), will kill the player. Ali Cat refers the player to Catolax, a deceased Slayer Master who resides in the tombs at Ullek, to help resolve the issue.

Retrieved from "https://runescape.fandom.com/wiki/Ali_Cat?oldid=24924739"
Community content is available under CC-BY-SA unless otherwise noted.