Bruised and beaten, but he still looks regal.

He exudes an aura of wisdom far beyond his years might suggest. 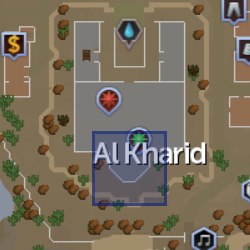 Emir Ali Mirza is the current ruler of the emirate city of Al Kharid, a large bustling town in the Northern Kharidian Desert. He was the prince prior to his father's death in Stolen Hearts.

He took great care to heed his father's lessons, putting aside his personal feelings when dealing with people, friend and foe alike. When forced to deal with a traitor amongst his men, he showed mercy and exiled them despite his desire to see them killed,[1] and when Ozan, the man who saved him, was exiled for his crimes, Ali kept the punishment in place despite his favourable feelings towards him.[2]

Following Osman's exile after Our Man in the North, Emir Ali replaces the Keris and accepts sq'irkjuice.

The following takes place during Stolen Hearts and Diamond in the Rough.

During year 169 of the Fifth Age, the then crowned Prince Ali was kidnapped by a criminal group known as The Skulls[3] while touring the neighbouring village of Lumbridge.[4] After being led to Draynor Village by the gang members, he was then handed over to Lady Keli, the commissioner for the kidnapping. This was done in order to use Ali as a form of ransom to obtain the Kharid-ib diamond, a large and powerful gemstone that is of significant importance to the history of Al Kharid. Despite the intervention of Leela, one of Al Kharid's spies, and a pair of adventurers, Ozan and another, Lady Keli managed to take him from Draynor. The trio used the Kharid-ib to track Lady Keli, who revealed herself to be Amascut, then defeated her henchmen Apep and Heru, rescuing the prince. He returned home to find that his father, Emir Shah, had died, and so took over as Emir of Al Kharid.

The following takes place during The Jack of Spades and Our Man in the North.

Later that year, the Pharaoh of Menaphos sent a request to Ali, requesting the resumption of trade between their two cities.[5] He compiled an envoy comprising of Grand Vizier Hassan and the adventurer who had rescued him, sending them to Menaphos.

Later, the adventurer returned to Al Kharid, presenting Osman with a sought after book and gave Ali a report from Hassan. Ambassador Jabari appeared, demanding the return of the book, claiming it had been stolen. He also claimed that Osman had been playing the role of double agent, providing Jabari with information needed to kidnap Ali. Osman protested his intentions while the adventurer went to deal with Jabari. Ali stripped Osman of his position as spymaster and banished him from Al Kharid under pain of death.

Retrieved from "https://runescape.fandom.com/wiki/Ali_Mirza?oldid=24924624"
Community content is available under CC-BY-SA unless otherwise noted.