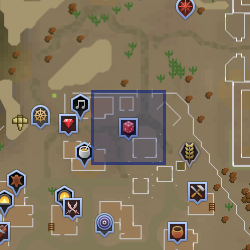 Ali Morrisane is a greedy, cunning and infamous Pollnivnian merchant who is always on the lookout for new business opportunities. He is located on the market in the northern part of Al Kharid, not far from the silk trader. He will often sell useless junk to players for about 10 coins each without the player's consent.

He was born in Pollnivneach and is prejudiced by the citizens of Al Kharid because of this. He is often called a lowlife for his greedy deeds and was put in an unknown prison for 5 years. His known family members are his nephew Ali Baba (who may not actually exist), his young son, Farid, who works at the Grand Exchange in Varrock, and a cousin by the name of Alex the Brave. He wrote a very basic guide on how to kill things, which can be read in the Varrock dummy training area by the east bank. It is also said in Postbag from the Hedge that he drove Lesser demons from unknown parts to Crandor. Despite owning a small stall, he seems to be very rich, employing many people and devising large schemes and scams that make him richer.

Appearing harmless, Ali is a brilliant businessman who crosses all limits when trying to achieve his goal. After having an adventurer settle a feud between bandits and Menaphites that follow Amascut in his home town, he "invites" a number of his nephew's acquaintances to Al Kharid to set up business. In reality, this farmer, tailor, smith and guard (Ali, Ali, Ali and Ali respectively)'s jobs are to threaten all of the town's shopkeepers, or rather, anyone who offers services or goods for payment, to join Ali's chain of business or have theirs taken down. Nevertheless, the shopkeepers of Al Kharid continue to live their lives naturally, knowing that Chancellor Hassan has put Spymaster Osman and the Elite Guard on it. When asked about it, Ali denies involvement and promises to have a talk with the Alis, explaining their behaviour by claiming they are simply enthusiastic from the move.

Ali owns a shop of general stock that functions like an ordinary general store, though players can only sell back the items he carries, unlike general stores. Players can buy desert robes here.

After the completion of the Rogue Trader miniquest, he expands his shop to sell:

Each time the player talks to Ali Morrisane, he will try to sell the player something. If you fail to resist, some unwanted junk may appear in your inventory and you will lose about 10 coins. However, some of these items may be sold back to Ali Morrisane to obtain a profit.

Once The Feud quest has been completed, Ali Morrisane will need the player's help once again. He wants to expand his business, and will require the perseverance of the player to deal with various suppliers all over RuneScape. One part of this miniquest includes a sudoku-style puzzle, which increases the types of runes that can be purchased. When the GE was instituted, the cost of runes were greatly increased and it is now rare to see players playing the puzzle or purchasing runes from Ali.

Retrieved from "https://runescape.fandom.com/wiki/Ali_Morrisane?oldid=24924621"
Community content is available under CC-BY-SA unless otherwise noted.