Start a Wiki
OS
Not to be confused with Al the Camel. 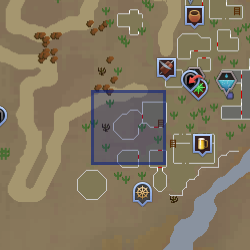 Ali the Camels are two camels sharing the same name in a pasture in the middle of Pollnivneach. These camels are important in quests due to their dung which a player can achieve via pouring Red hot sauce into their trough.

They can be found in a pen near the Camel Trader. They are rather bad tempered and will attempt to kick you if you insult them.

If you try to pet them your character will have one of three responses. One is "That beast would probably bite my fingers off if I tried to pet it" another is "I'm not going to pet that! I might get fleas or something else that nasty creature might have." and the last is "Mmmm... Won't you make the nicest kebab?" which is paired by an expression that your character pulls.

Retrieved from "https://runescape.fandom.com/wiki/Ali_the_Camel?oldid=24924515"
Community content is available under CC-BY-SA unless otherwise noted.